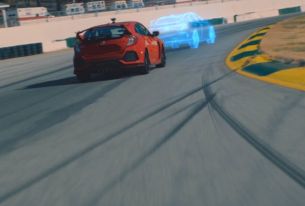 What happens when you pit Indy race car driver Graham Rahal against professional video gamer Peter Jeakins? Honda wanted to find out using one of its highest performing vehicles, the Honda Civic Type R and Microsoft’s mixed reality technology. UNIT9 had to deliver a tech-infused, data-driven experience where the real-world 2018 Type R actually raced the Xbox One Forza Motorsport 7 version.

To capture the precise data that would inform the experience, UNIT9 had Jeakins drive a lap in the game using a VRX Motion Rig (the world’s most advanced racing simulator). Using the Unity game engine, an Inertial Measurement Unit and a High Precision GPS/GNSS Module, they were able to create an unbelievably accurate “ghost car” that behaved just like the real one. The team also built a custom mixed reality windshield that was mounted inside Rahal’s physical Type R so he could see the distance between the two cars as well as their relative positions on the track.

The biggest challenge was to minimise latency and maximise accuracy. UNIT9 wanted the race to look and feel like a real race, but most importantly, declare the true winner.

Because the team didn’t want race car and gamer fans to miss a moment, they created a stunning film, directed by Jonathan Pearson, that was used across all of Honda’s social media channels. UNIT9 mounted cameras inside the car to capture the driver’s POV, an over-the-shoulder POV and the Rahal’s reactions as he raced.

Davide Bianca, Head of VR | AR | Animation, UNIT9, said: “We wanted to take high-speed performance and competitive racing in a whole new direction, and truly  blur the line between the physical and digital world, between what our brain processes as real and virtual.”