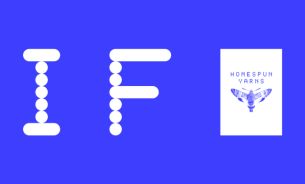 This year’s entries were of an overwhelmingly high standard and the finalists impressed the Homespun panel with their interpretation of the brief as well as their pitches.

Homespun, EP Alice Clarke commented, "As usual we had our work cut out, especially given the ambiguity of the brief, If.  We have four outstanding finalists and we’re looking forward to seeing how their films develop.”

The Homespun Yarns finalists for 2018 are:

Steve is a copywriter at Publicis who spends his days, ‘devising cunning ways to make the nation fatter and poorer’!  For the past eighteen months Steve has been working on longer form content with a script editor at the BFI and sees Homespun Yarns as the perfect opportunity use his creativity to make a film without a logo!

Daniel graduated from Bournemouth in 2014 with a BA Film Production and has since been working as a filmmaker and visual artist.  His video ‘Mona Lisa Selfie’ won a Vimeo staff pick and last year Daniel launched the Directors Library – an online platform featuring curated selections of videos.

Stroma Cairns is a London based director and photographer represented by Prettybird.  With an intimate and honest filming approach Stroma’s British aesthetic comes from a childhood, growing up moving around England and she is drawn to stories revolving around youth and family.

Loveless, Stickley and Wood are three pals who’ve spent the past seven years expanding on each and every thought they have ever had. The trio are each other’s outlet to make all the exciting stuff outside of their day jobs as agency creatives.

An added twist in this fifth Homespun Yarns was the development of the competition’s relationship with film industry stalwarts Kodak and Panavision. Kodak offered all finalists the chance to shoot on 16mm film, they are supplying, stock, processing and transfer and Panavision are providing a 16mm film camera.

The partners and supporters of Homespun Yarns are instrumental in the continued success and growth of the competition.  This year sees more support than ever from companies who are offering their skills and services to help create the best films possible.

Leo King, Stitch Co-owner and editor comments on how the Yarns initiative has developed,  “the idea this year is to educate young filmmakers through our associations and supporters.  We are incredibly lucky to be working with Wave Studios, Panavision, Direct Digital, Kodak, Freefolk, MPC and The Mill, who will all be involved from the pre-production stages to advise our directors and guide them through their areas of excellence.

Performance Film and Media Insurance are involved for the first time, they will be on hand in relation to the film insurance process.  We want everyone involved to establish contacts they can build relationships with for the future.”

Homespun Yarns are also delighted that Sohonet and Slingshot are sponsoring the competition for the second year running.

The awards night will take place in October when the films will be screened and judged by the audience.  As wells the kudos of winning, the overall winner will receive a £500 cash prize and an unrivalled kick-start to their filmmaking career.