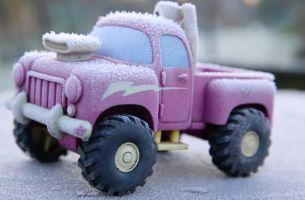 Stuffed full of mince pies and over-flowing with mulled-wine, it can be easy to revel in the warm glow of the festive season. As the frost starts its sparkling descent onto the English landscape, it’s also important to spare a thought for those having to sleep outside. A new film from charity StonePillow, directed by Tim James Brown, aims to remind us that behind the sparkle lies the uncomfortable truth of homelessness and dangerously low temperatures.

With stunning macro cinematography and calming piano composition, ‘Frost’ lulls us into a moving montage fit for a National Trust calendar. What can be more beautiful than crisp frost and bird song? It’s life frozen at its best, just waiting for the sun to come up and for kids to start playing. For some though, the silence is deafening and the frost is enveloping.

Director and DoP Tim James Brown comments, "Clive Pickering, Diego Arellano and I enjoy using our skills to do some good - it helps us sleep at night. Having worked on Drink Drive, Speed Kills and the National Drug Helpline accounts, we’ve learnt that simple shock tactics don’t work. We wanted to demonstrate the juxtaposition of the beauty of a morning frost and the deadly effects of the winter on homeless people during the preceding hours of darkness."

The strap line ‘A night outside freezes everything. Don’t let it freeze your heart’, reminds us to think outside of the beauty and to support homeless people through the charity, who aim to empower the homeless to better their lives.