Ending violence towards women, changing the view of life insurance and helping Aldi become is just some of BMF Sydney's biggest feats 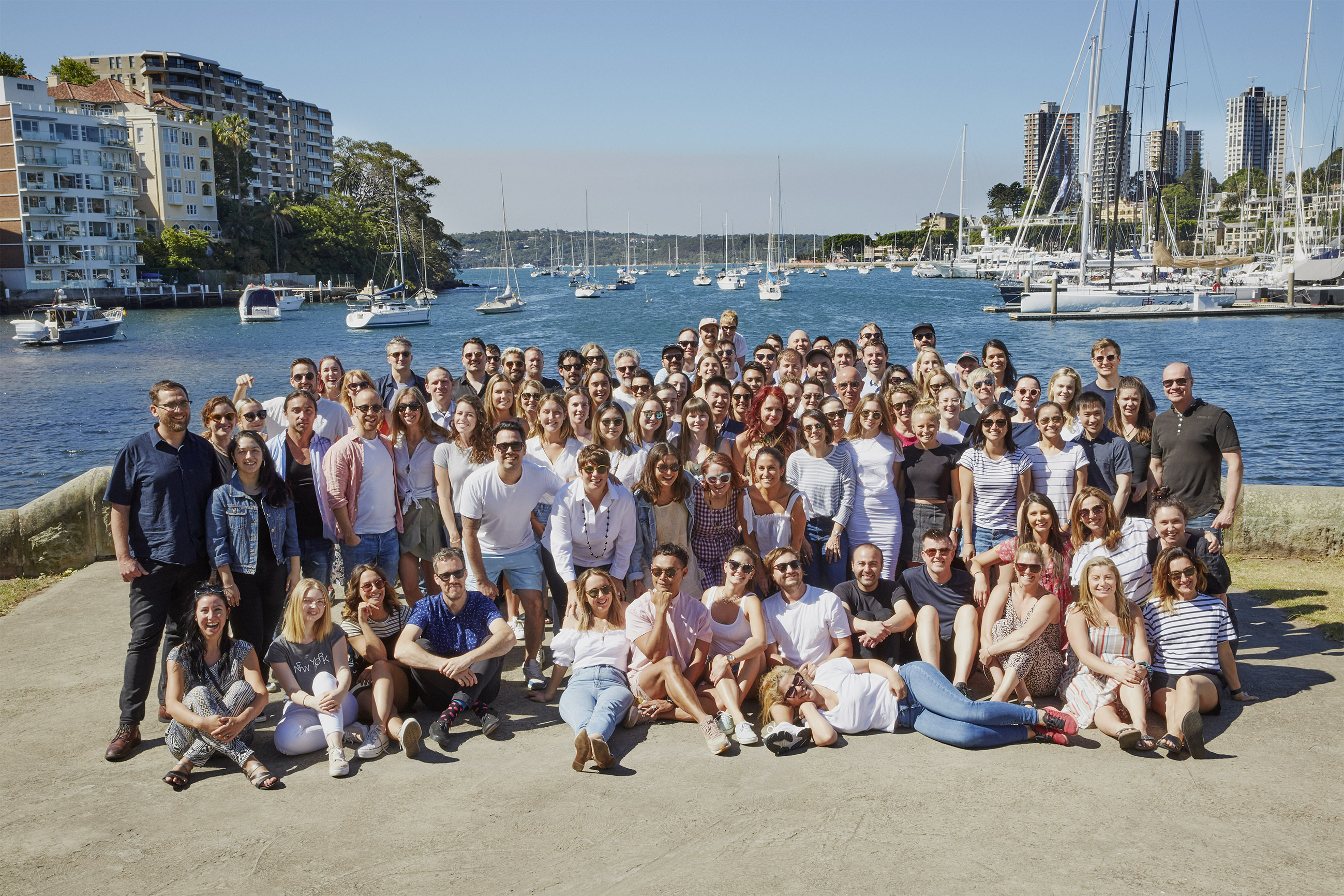 As the self-confessed home of the long idea, BMF has produced work that’s helped to shape some of Australia’s most revered brands, and, along the way, has created campaigns to start important conversations in living rooms all around the country.

Continuing to disrupt the supermarket duopoly, BMF’s brand platform for ALDI, ‘Good Different’, helped to make Australia the discount retailer’s fastest-growing market in the world and Roy Morgan’s ‘Australia’s Most Trusted Brand’ – ahead of iconic Aussie brands including Qantas, Bunnings and the ABC. The agency also invited the world to ‘come down for air’ when it launched a unique brand narrative for Tourism Tasmania that brought the southern island to life with an invitation to break free from the stresses of modern life with the chance to breathe in the nature and culture that only Tassie has on offer.

And, it’s not often that you get six out of 10 adult Australians to take action – without tangible incentive, but that’s exactly what BMF did with the ‘Stop It At The Start’ campaign for the Department of Social Services.

While phase one of the Effie-winning campaign established the truth that the excuses we make for disrespect allow violence against women to grow, last year phase two tackled the arguably tougher objectives of getting Australians to reconcile their role and to respond. The Hon. Malcolm Turnbull, former Prime Minister of Australia, even weighed in, stating the campaign was “one of the most effective Government campaigns I’ve ever seen”. 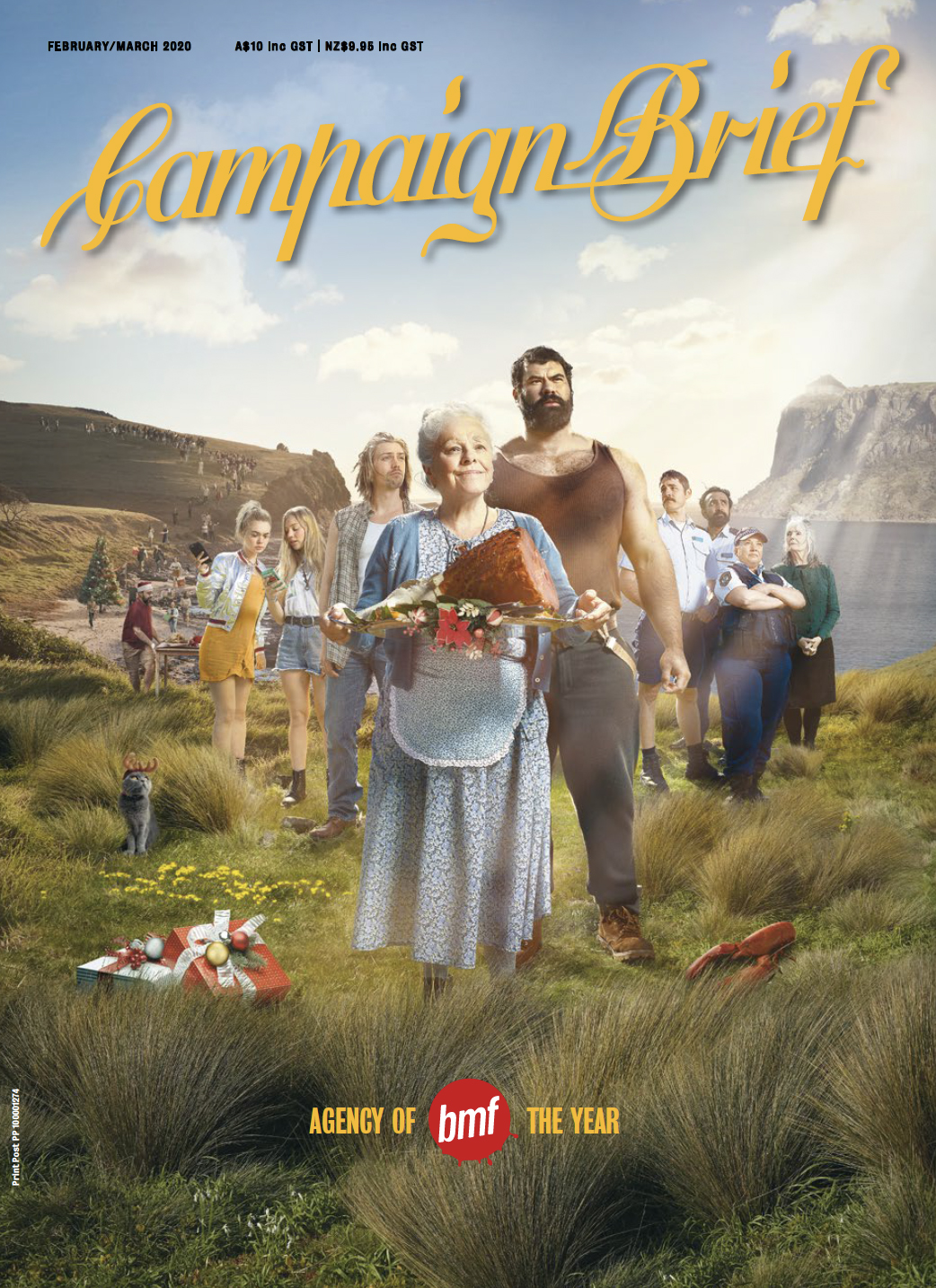 Rather than playing on people’s fears, last year BMF celebrated everything that’s worth protecting in this sun-kissed Aussie, life for TAL Insurance, with ‘This Australian Life’. The agency’s challenge was to launch a brand that nobody had ever heard of, in a category renowned for fear mongering, and position it as a life insurance company that understands Australians better than anyone else.

Reflecting on the past 12 months, BMF executive creative director, Alex Derwin, says: “We had a lot of standout work this year but what pleased me most was the consist-ency across the board. ALDI was as strong as ever, TAL landed an incredibly powerful campaign and we struck a different note altogether with Tourism Tassie.”

What each campaign shares, he says, is an ability to connect emotionally.

“Whether it’s to make people laugh, cry, or feel incredibly chill, we work hard to chase down truths and make ideas that make you feel something. We definitely don’t discriminate – we apply the same care and attention to all of our clients, and it has delivered results not just this year but for the past few years.” 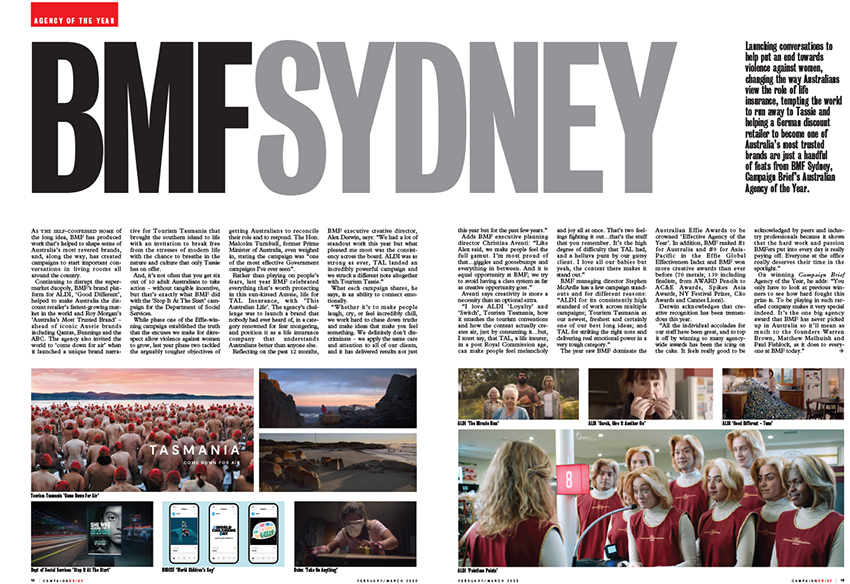 Adds BMF executive planning director Christina Aventi: “Like Alex said, we make people feel the full gamut. I’m most proud of that…giggles and goosebumps and everything in between. And it is equal opportunity at BMF; we try to avoid having a class system as far as creative opportunity goes.”

Christina says creativity is more a necessity than an optional extra.

“I love ALDI ‘Loyalty’ and ‘Switch’, Tourism Tasmania, how it smashes the tourism conventions and how the content actually creates air, just by consuming it…but, I must say, that TAL, a life insurer, in a post Royal Commission age, can make people feel melancholy and joy all at once. That’s two feelings fighting it out…that’s the stuff that you remember. It’s the high degree of difficulty that TAL had, and a helluva punt by our gutsy client. I love all our babies but yeah, the context there makes it stand out.”

BMF managing director Stephen McArdle has a few campaign standouts and for different reasons: “ALDI for its consistently high standard of work across multiple campaigns; Tourism Tasmania as our newest, freshest and certainly one of our best long ideas; and TAL for striking the right note and delivering real emotional power in a very tough category.”

The year saw BMF dominate the Australian Effie Awards to be crowned ‘Effective Agency of the Year’. In addition, BMF ranked #1 for Australia and #9 for Asia-Pacific in the Effie Global Effectiveness Index and BMF won more creative awards than ever before (70 metals; 139 including finalists, from AWARD Pencils to AC&E Awards, Spikes Asia Awards, NY Festival Prizes, Clio Awards and Cannes Lions). 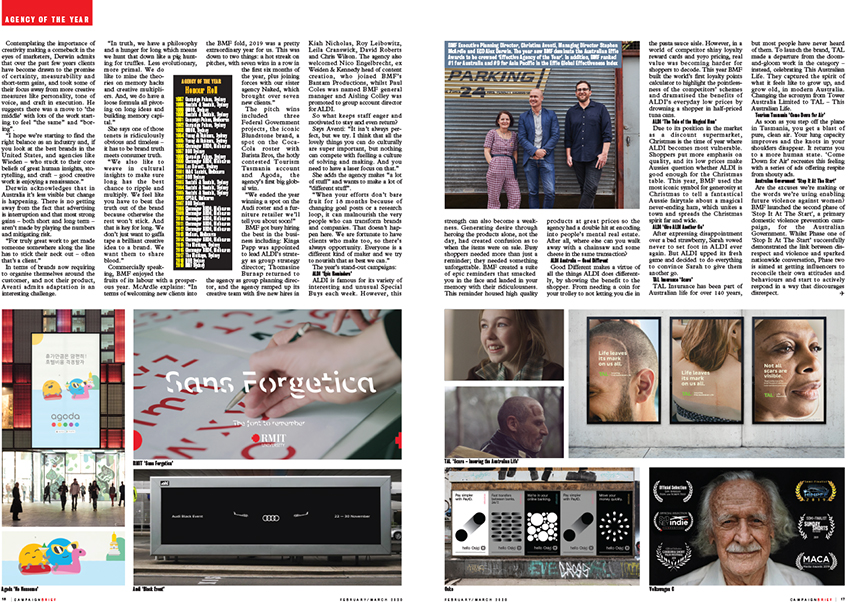 Derwin acknowledges that creative recognition has been tremendous this year.

“All the individual accolades for our staff have been great, and to top it off by winning so many agency-wide awards has been the icing on the cake. It feels really good to be acknowledged by peers and industry professionals because it shows that the hard work and passion BMFers put into every day is really paying off. Everyone at the office really deserves their time in the spotlight.”

On winning Campaign Brief Agency of the Year, he adds: “You only have to look at previous winners to see how hard fought this prize is. To be playing in such rarefied company makes it very special indeed. It’s the one big agency award that BMF has never picked up in Australia so it’ll mean as much to the founders Warren Brown, Matthew Melhuish and Paul Fishlock, as it does to everyone at BMF today.” 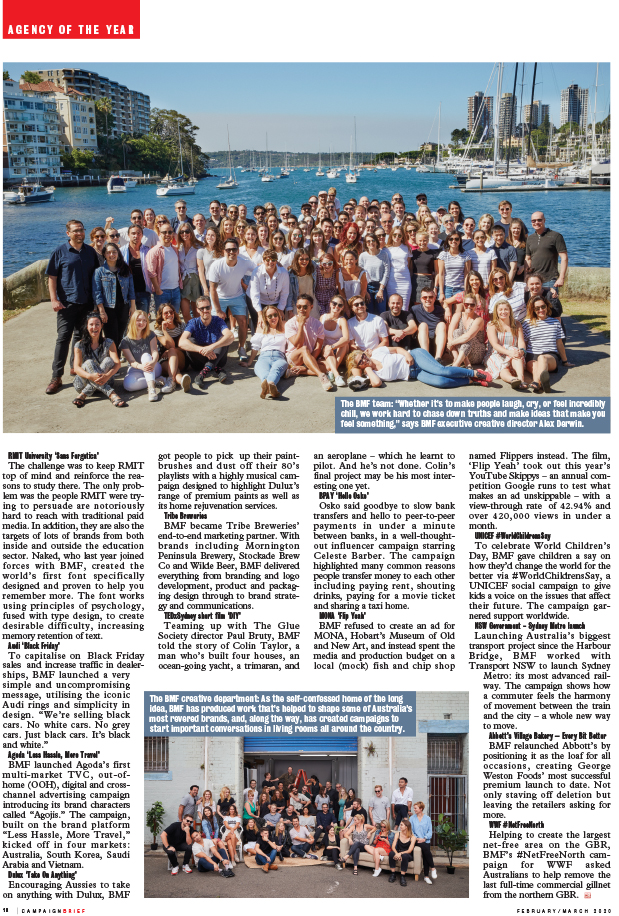 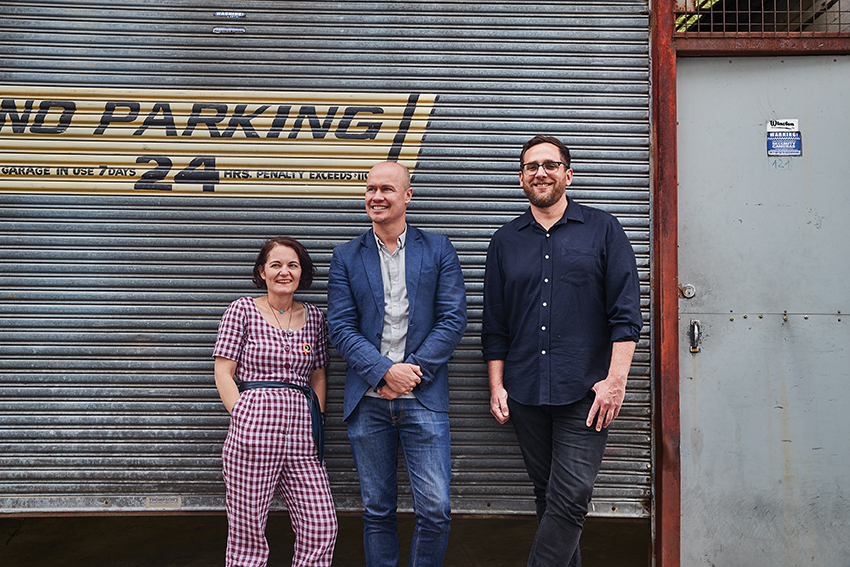