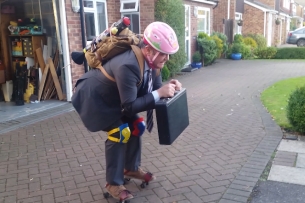 Direct Line and Saatchi & Saatchi London have launched a series of comical Facebook ads that pose the questions “If your car was stolen or written off, how would you get to work/get the kids to school/go on holiday?”

Promoting Direct Line’s guaranteed hire car proposition that keeps drivers moving, the three bespoke social videos, ‘Cannon’, ‘Balloon’ and ‘Skates’ are part of an integrated campaign that includes the 30” TVC ‘Hens’ which saw Winston Wolf come to the rescue of 'Julia and the girls’ when their car was hit on the way to a hen party.

Direct Line offers guaranteed hire car cover for all customers with a comprehensive car insurance policy until their car is fixed, if using an approved repairer, or for 21 consecutive days when using their own garage. Unlike most Direct Line’s competitors, this applies even if the claim is for a stolen or written off car.

Hosted on the Direct Line Facebook page, the three videos star a family coping without their car in three situations - ‘holiday’, ‘school’ and ‘work’ - with hilarious consequences.

In ‘Cannon’, mum - complete with suitcase – climbs into a giant cannon, posing for one last photo with the kids before dad lights the fuse and mum is fired off to Cornwall for the family holiday. As the screen goes black, we hear Dad ask, “who’s next?”

In ‘Balloons’, the children are each tethered to a bunch of balloons, mum cuts the rope and off they float (hopefully) to school.

In ‘Skates’, a suit-clad dad complete with pink, ill-fitting kid’s helmet, skates and rocket-laden backpack is given his briefcase before mum lights the fuse. As the screen goes black we hear the rocket explode and dad scream.

Wendy Pearson, head of marketing at Direct Line says; “We're really excited about introducing bespoke Facebook creative into the next phase of our campaign, demonstrating to customers how Direct Line can fix their problems at the point of need. Using a number of everyday scenarios that we can all relate to will continue to build on the fantastic engagement we've already had through the rest of the campaign led by our "fixer" Winston Wolf."