Shoppers get to drive down the price of discounts 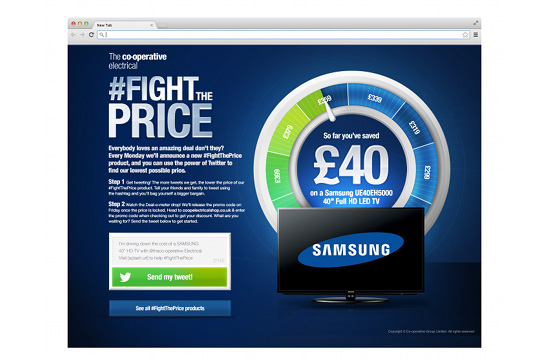 Shoppers at The Co-operative Electrical are getting the chance to lower the price of electrical goods in a new Twitter campaign.

The Co-operative Electrical is inviting consumers to tweet in order to get major discounts on products as part of the new ‘Fight The Price’ campaign by Holler.

Shoppers will be directed to the website www.fighttheprice.co.uk to view what’s on offer and then invited to tweet at the hashtag #fighttheprice. The more people tweet, the bigger the discount will be.

The first product on offer, a Samsung TV, will be unveiled on the Monday of the first week of the promotion. People will have until 10am on the Friday of that week to tweet.

The discount, which is calculated according to the number of people who tweet, will be revealed when the price is frozen at 10am on the Friday morning, along with a code that shoppers can use to redeem the offer.  People will then have the weekend to purchase their Samsung TVs.

On the second week, the product on offer will be an Indesit washing machine and the final product will be a Hotpoint dishwasher.

Gail Lyon, Social Media Lead at The Co-operative, said: “This is an innovative use of social media which gives consumers the power to discount products.  We hope shoppers will embrace the campaign as there are some fantastic savings on electrical goods.”

Pete Jackson, senior planner, Holler, said: “This is about bringing The Co-operative's community ethos to the fore in their social activity, putting people in control and getting them a good deal.”