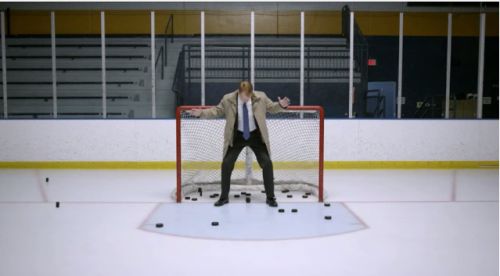 National Comedy Director Matt Pittroff of Twist took to the hockey rink recently to shoot a humorous new spot for Enterprise Rent-A-Car, an Official Partner of the NHL, featuring T.J. Oshie of the St. Louis Blues. Collaborating with a celebrity talent not used to being in front of the camera performing lines, Pittroff relied on his long-term collaboration with agency creatives at Cannonball and his famous preparedness to score big.

“While T.J. had little experience, he was great to work with,” says Steve Hunt, Cannonball’s CCO. “We were especially sensitive because we were shooting T.J. on one of his rare off-days. Matt not only made the day fun for T.J., which captured a great performance, he kept the day moving so T.J. was finished on time. When you work with Matt, you get a Director who gets excited about the work, and works tirelessly to make it better. As an agency creative, what more can you ask?”

“This project came together quickly -- from brief to shooting in less than three weeks --and once we had a script, we realized it was a very fast timetable,” adds Cannonball CD/Copywriter Aric Jost, who notes that the idea for the spot was concepted and cultivated by Enterprise and brought to Cannonball. “Part action, part storytelling, part humor, with an untrained actor and only a few days lead time. That scenario would have made a lot of creatives panic, but we relaxed once we got word Matt was available. With a long history of past work together, we knew he could squeeze everything we needed out of the script, and that he and Twist would bulldog every available minute of prep time until the cameras rolled. Even with the pressures of a tight deadline and the high-profile nature of the project for the client, Matt did not disappoint. Not that we ever doubted.”

The Twist team had less than a week to prep for the project, requiring 24 hours of ice time in St. Louis during the middle of hockey season. For Director Matt Pittroff, he quips: “Just another day at the office for us.” Pittroff notes that working with celebrity athletes can present its own set of production challenges. There are often time constraints, media distractions, and the end goal: getting a non-actor to act. Throw all of that onto a sheet of ice and you have the recent Enterprise shoot.

“Going into a job like this demands an extra level of care and preparation knowing all along that your well-laid plans could get turned upside down at any point,” details Pittroff. “I have to admit: T.J. made our lives pretty easy on all fronts, but nonetheless, we were prepared for anything. I approach and treat celebrities and athletes with the same level of respect I would any actor or anyone on my crew. Part of my job is to help create a comfortable atmosphere on-set so that everyone can excel at their respective job. I could tell right away that T.J. was a humble guy that was eager to please. Knowing what my creative end goals were; I worked with T.J. to block out shots and incorporate behaviors and actions that were natural to him. As a Director, I am always looking to peel back layers or avoid any unnecessary variable that hinders the actor (or in this case T.J.'s) ability to perform naturally.”

The Twist Director adds that one of his techniques on this shoot was capturing as much in-camera as possible. “In this case, all pucks were live, although foam, and perfectly placed by T.J.,” he describes. “I wanted the reactions to be as genuine as possible, and CG pucks just would not have gotten us there. Through the wizardry of sound design, the effect is sold. It was quite possibly the quickest, easiest, and least expensive solution to the challenge. It was also the most effective.”

Pittroff also relied on his long-term collaboration with ad agency Cannonball. “I have developed a really nice relationship with them over time, and with that comes respect for each other’s creative choices,” concludes Pittroff. “We were working pretty quickly on this one; and if you are moving quickly without trust, you are in trouble. The history between all parties involved -- from the NHL to Enterprise to Cannonball to Twist --enabled this job to happen not only under tight time constraints, but under a great creative climate. It is always my goal to deliver a very clear and singular vision. It doesn't matter to me where the best ideas come from, so long as they rise to the surface and are channeled through one voice on the day of the shoot. Steve, Joe, and Aric allowed me to do my job and helped to cultivate a truly collaborative process throughout. Together, they are like 12 feet taller than me, so they easily could have just pushed me and my stupid ideas aside.”

For Twist’s Executive Producer Amyliz Pera, she points out that working with a Director and the process of planning is more important than people give it credit for. “So often, we look at reels and the end product when we assess Directors,” she notes. “I understand it's hard to quantify process, but Matt is well poised for clients who feel that's also an important factor. Matt's qualities, as a Director and person, are pleasantly comprised of perceived dichotomies. I feel like it's one of the reasons he's great with celebrity talent -- and gets the balance of special treatment with creating a comfortable and normal environment. Along those lines, Pittroff is one of the few people I know who can command respect while being self-deprecating. He approaches trouble-shooting with reverence and care while being funny and putting clients at ease. He has as much presence on-set as any of the talent -- yet his graciousness shines the spotlight elsewhere. He's anally retentive when it comes to art direction and has a strong point of view, but remains very flexible and collaborative. He sees through the eyes of an artist and strategist. And, at the end of the day, he always says ‘Thank you.’"