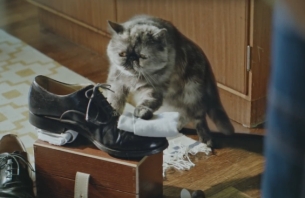 In their latest films for the Swedish bank Ikano Bank, Hobby Film’s Oskar Bård & Swedish agency Doe Blomberg Gottberg, the agency behind the famous Bob Dylan concert for one super fan, remind people that even if your dreams don’t always come true, there are still people out there looking after you.

The Nordic campaign’s films feature some too-good-to-be-true characters; a pair of especially talented and equally adorable animals as well as the some of the most well behaved and helpful children a family could want.

"Our first films for Ikano Bank show the absurd things that people dream about. The idea is to remind people that it’s not the banks role to make these a reality. Ikano Bank provides good banking services, nothing more and nothing less", says Eric Falk and Kristin Bergem, creatives at Doe Blomberg Gottberg.

The campaign consists of films, print ads and banners and was developed in collaboration with director Oskar Bård and still photographer Alexander Crispin.

"Adorable animals & children, what more could you want in a script?" says Oskar Bård. "I love these shoots with ‘difficult’ talent, it always makes the end result even more rewarding."

The films are currently being shown in Sweden & Denmark.