To mark its 135th anniversary, the Saints reveal new kits for with launch of video game, ‘Defying the Odds since 1885’ 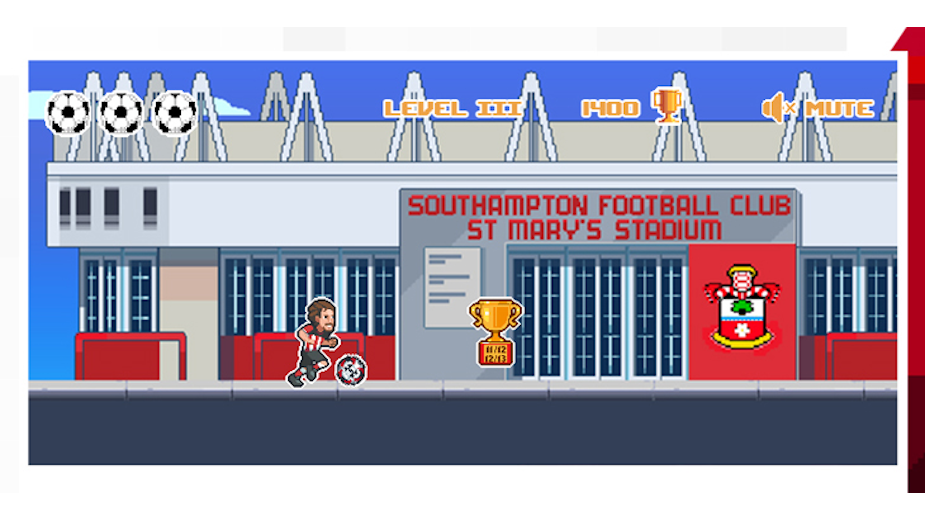 Southampton Football Club has today unveiled its brand-new kits for the 2020/21 season. The club has released an arcade style video game, which takes players on a journey through its 135-year history to unlock the new home kit and mark the milestone year.

Called ‘Defying the Odds since 1885’, a nod to the club’s tenacious legacy, the video game features three levels for fans to conquer, each unlocking a different part of the new home kit once complete. Beginning in 1885 at the club’s inception and leading up to the present day, the levels, which see the player donning consecutive historic kits, represent different eras in the club’s history.

The goal of the game, which was produced by 'Tech Company of the Year’, UNIT9, is simple: dribble your way through history collecting as many points as possible by picking up various objects, avoiding obstacles and ‘defying the odds’ along the way. Taking a cue from the world of gaming, the experience includes a number of hidden references that only true Saints and football fans will notice, including club cult heroes such as Matt Le Tissier, Kevin Keegan, Ali Dia and Markus Liebherr. There are also various obstacles to avoid including rival Portsmouth players, Liverpool’s bank manager and Harry Redknapp in his Range Rover. The game also includes notable sights: Southampton City landmarks, the old Wembley where the club won the FA Cup in ’76, Southampton’s first stadium, the Dell, and the team’s current home, St Mary’s.

Both Saints fans and football enthusiasts alike are sure to appreciate the game’s level of detail and interactivity. What’s more, overall winners on the live leaderboard stand the chance to win an ultimate football gaming bundle featuring a PS4 or Xbox and FIFA 2020. Runners-up have the chance to win a signed 20/21 replica shirt or a stadium tour with Matt Le Tissier.

Southampton FC’s new home kit for 2020/21 sees the return of the club’s iconic sash design first featured back in 1885, where players would wear a physical sash over their shirt, placed over either shoulder.

In goal, Saints shot stoppers will wear either an all-blue, all-pink or all-yellow kit: the latter two available to pre-order from 8th July. The away kit is due to be revealed in early August and will be available on pre-sale at the same time.

Charlie Read, head of marketing at Southampton FC, said: “As we mark the 135th anniversary of Southampton Football Club, the players, the staff and the fans alike are proud to remember our rich history, and that’s why the new kit features the iconic sash design that first graced Southampton’s shirts back in 1885.

“We’ve always had a fighting spirit and we’re proud of that, so we couldn't think of a better way to mark the club’s 135th anniversary than by reminding our fans of the many times we’ve defied the odds throughout our rich history. Creating an interactive retro style arcade game to take fans through the club’s history and allow them to unlock the new kit, felt like the ultimate way to do this.

Luke Nicholson, director of brand and content at Southampton FC, added: “Despite the challenges that football clubs have had to face in recent months, our desire to find new and exciting ways to engage our fans remains strong. We hope the details within the game bring a smile to the faces of Saints fans and that they’re excited by our new kit to celebrate our 135-year history.”

Kate Lynham, creative director at UNIT9, said: “Capturing Southampton FC’s long history in a retro 8-bit pixel style was no easy feat but the resulting game is a suitably light-hearted and humorous throwback to the team’s most classic moments. By including plenty of Easter eggs along the way, Defying the Odds is a sure-fire way to get football fans smiling while promoting the kit in a really fresh way.”