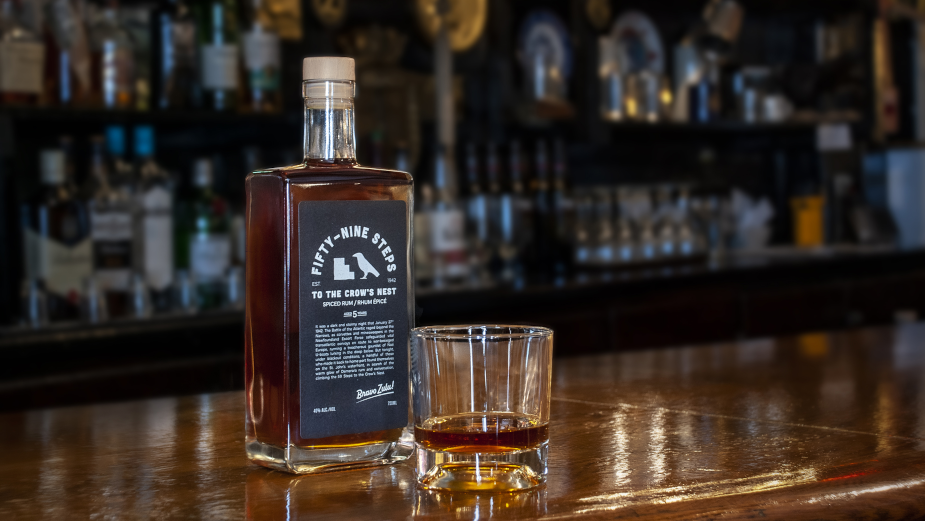 On a stormy night in January 1942, surviving naval officers of World War II’s ‘Battle of the Atlantic’ arrived at the St. John’s harbour front. In search of the warm glow of rum and conversation, the war-weary survivors climbed fifty-nine rickety steps to find refuge in what they called ‘a snug little crow’s nest.’ Thus, Newfoundland and Labrador’s first Seagoing Officers’ Club was born – The Crow’s Nest.

Designated as a National Historic Site and Registered Heritage Structure, the bar and living museum observed its 80th anniversary by creating its own brand of demerara rum as a tribute to its origins.

Target, the creator of the rum’s branding, took inspiration from the historic origin story. “We made the story of the Crow’s Nest the brand story. And the brand,” says Noel O’Dea, president and founder of Target. “The label itself we designed to be an honest reflection of the era – with the look and feel of handcrafted letterpress and woodblock.”

But it’s not just the Crow’s Nest’s story. Located on one of the oldest streets in the oldest city of North America, The Crow’s Nest shares its historic space with Target. As the longest standing independent ad agency in Canada, and the only ad agency in the world with a Nazi U-Boat periscope on its roof, Target was eager to take on a project so close to home.

“Today, as then, people weren’t buying ‘rum.’ They were buying social lubrication. Comradeship. Community,” says Gary Walsh, Immediate Past President of The Crow’s Nest. “The Crow’s Nest was delighted to work with Target and the Newfoundland Distillery Company for this initiative. We produced a fine dark rum, with a creative and informative label, that has been a huge success. The Club greatly appreciates the outstanding contributions made by both.”