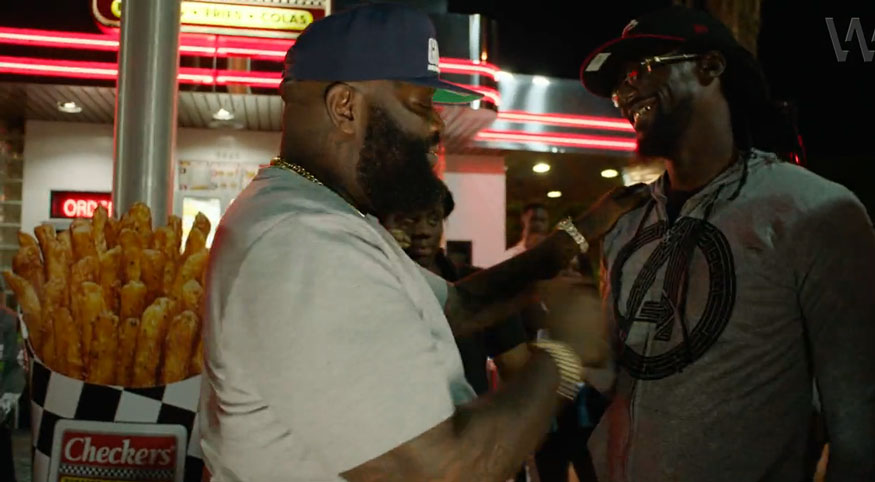 Hip-hop artist and entrepreneur Rick Ross has teamed with Checkers Drive-In Restaurants to buy several Checkers & Rally’s franchises in the Greater Miami area and his native, nearby Carol City, Fla., the company announced.

In collaboration with Atlanta agency Fitzgerald & Co and Woven, Ross and Checkers & Rally’s created a documentary-style film about his deep connection with Checkers and life as a “Fast Foodie.” It tells the story of what the brand meant to him and his friends growing up—big, bold taste at an incredible value. The work marks the official launch of the partnership between Checkers and Ross.

Ross narrates the video while driving around his old haunts in Carol City. Scenes of kids and young adults on the playground, the schoolyard, and on the road flash by to his voiceover. Ross tells of the dreams and aspirations he had while growing up and how Checkers was a centerpiece of some of the best memories he had with his friends and family. The video also draws a direct line from Checkers to hip-hop culture.

Ross, 40, even bought the Checkers franchise right across the street from Miami Carol City Senior High School, his alma mater and where he played on the football team. In 2015, he released the album “Black Market,” which contains the single “Carol City.” The song describes the hardscrabble youth he and others endured there.

Owning Checkers & Rally’s franchises fulfills a childhood dream for Ross, who saved his dollars from a car-wash job to be able to eat at Checkers regularly. His success in the music business means he can have just about anything he wants, and as he says in the video, “I want Checkers.”

The franchise ownership also enables him to give back to the city and the people who nurtured him.

The video is supported by paid digital and social-media promotions with full takeovers (including home pages) of Uproxx and BroBible.

Ross continues the rags-to-riches theme in a new single, “Buy Back the Block,” with fellow artists 2 Chainz and Gucci Mane.

“A rap mogul, a brave client, a brick-and-mortar investment, branded content through partnership, a smash hit with a brand message built in—it’s one of the most exciting projects Fitzco has been involved in,” said Noel Cottrell, CCO of Fitzgerald & Co. “Working up front with Ross and Checkers on the marketing end of their deal, telling the rags to rose story with our partner Woven and then seeing ‘Buy Back The Block’ drop with the opening Checkers shoutout from Supa Cindy—if this is the future of our business, count me in.”

Alastair McKevitt, who won an Emmy for his camera work on HBO’s sports series “24/7,” directed the Ross-Checkers video. McKevitt’s prior work includes “The Off Season: Kevin Durant”; “UFC: Road to the Octagon”; and “The Marinovich Project.”