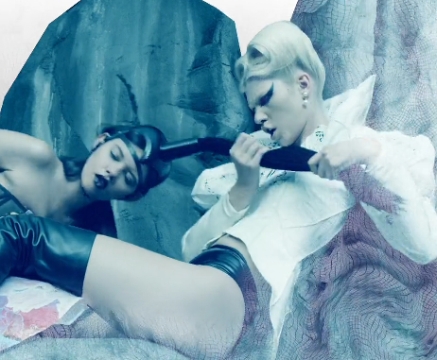 “Culturally, there’s been a shift in the industry over the last five or six years,” commented Gold. “Short fashion films are mainstream. What was important for this show was shaping this new space that now includes high end post production and pushing the boundaries.”

“The team applied what we know about creating the highest quality images to Zach’s underground technique of deconstructing and degrading the images,” said Moggach. “His work is meticulously crafted to be both pristinely graphic and aggressively visual. It's roots are in fashion but at it's core it's high art photography with a rebellious haute couture spirit.”

MassMarket started with high resolution images and applied custom tools and techniques to augment the extremely large files. This process enabled the manipulation, via bespoke algorithms, of approximately 30,000 distinct frames accomplished through multiple renders (some lasting as long as three days).

“The result retained the pristine detail of the original images but really fucked it up gorgeously,” added Moggach.

MassMarket’s team of artists also spent six weeks on color, beauty work, image compositing, and online editing, helping to deliver many of the visuals that make up the final film and producing the final, glossy finish.

“This was an absolute dream collaboration,” says Managing Director Jay Lichtman. “While as technically sound, if not more so, as many of the clients we often work with, Zach brings a distinct artist's aesthetic and approach to his projects. It was an opportunity for our team to work alongside a true creator of stunning imagery”