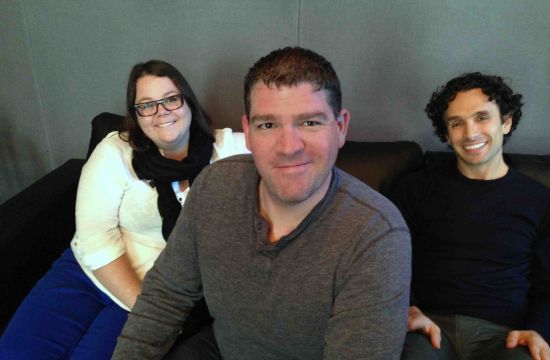 "We started in Los Angeles because that was where we were at the time," says Robb. "That was where we wanted to sink our roots. But weve always had our eyes on other large markets. It is important to us, however, that we grow in a way that fully supports the long-term health of the company. More importantly, in a way that lends itself to garnering the highest quality talent available. We had a plan. We wanted to grow smartly, not just quickly. By adding East Coast partner Jack Bradley, and then pausing to set up a second shop in Minneapolis, we feel we now have the momentum necessary to take on the advertising mecca of Manhattan."

HiFis first item of business in New York was devising the dream team to handle all facets of production in the big apple. Enter Andrea Minze. Previously the Head of Creative/Music Supervisor at Tonic Music in London, following a seven-year stint as agency creative at GSD&M, Andrea brings a unique set of expertise to the role of Executive Producer. She has worked on projects with notable recording artists like Alabama Shakes, Johnny Jewel, SBTRKT, and The Rolling Stones, on the one hand; and notable brands like BMW, AT&T, Nike, Dior, Axe, Dell, Kohler, Bacardi, and VW on the other.

"Jack and I were both agency producers before jumping into the music world," explains Roberts. "Our similar backgrounds, our common understanding of how commercial production works, was the first thing that drew us to Andrea. When you look at what she has accomplished as a music supervisor and producer, and you speak to her about her belief in music, building relationships and how it all has the power to push us beyond the status quo; there is no question she is the perfect fit to help lead this team."

Minze feels equally as fortunate for the opportunity to help put HiFi NY on the map: "I met Birgit on my very last production as a copywriter in advertising. We hit it off immediately. Fast-forward a few years and I was lucky enough to meet the rest of the team, and I knew it would be a great fit. Its not every day you get the chance to mind-meld with such an amazingly talented and kind group of people. And bringing the brand to NYC was a total no-brainer for me."

The other half of the dream team is the tremendously accomplished composer and multi-instrumentalist, Robert Di Pietro. DP, as he is probably better known, has shared the stage and recorded with big name artists like Norah Jones, Josh Rouse, Jesse Harris, Elysian Fields, Ursa Minor, and Vanessa Carlton, among many others. He has performed on Letterman, Leno, Conan, The Today Show and Live From Abbey Road. He made an appearance in Seth MacFarlanes TED and helped score Matthew Barneys cult classic Cremaster 4. He has composed music on national campaigns for Best Buy, Mazda, Chevy, Tropicana, Wendys, Macys, and many others.

"Robert is the whole package," notes Roberts. "He knows music like the back of his hand, he understands the crossover of art & commerce, and is a total joy to be around. He plays everything with expert precision, and focuses all of himself on the craft of sonic storytelling. He has a strong footing in the New York music scene, too, hailing from Williamsburg and continually playing out with some of the citys best. We feel incredibly lucky to have him bringing all of that to our table, daily."

"I'm someone who has always been inspired by doing a lot of different things at once," says DP. "Being part of HiFi has already given me the opportunity to work on a series of great projects that have challenged me. I feel very fortunate to call this -- creating just the right music for just the right story -- my job."