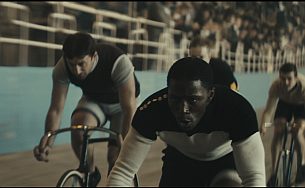 Today Hennessy V.S.' launched their most integrated campaigns, "Major".
Since 2012, Droga5 has celebrated Hennessy’s ‘Never stop. Never settle.’ mantra and the theme of pushing one’s potential through stories of extraordinary individuals and the Wild Rabbit—the brand’s metaphor for people’s inner drive to succeed.
And the next iteration, set to air on TV on April 14, will tell the “Never stop. Never settle.” story of Marshall Major Taylor, the fastest man on two wheels. At a time when an African American world champion of cycling was unheard of, Major Taylor was it. Hennessy’s new creative celebrates his perseverance through adversity and his rise to the top.
Directed by Derek Cianfrance (Blue Valentine, Place Beyond the Pines), the films depict Taylor as the greatest athlete of his day, a dominant champion whose search for rivalry pushed him deeper into competition with his own self.
What begins as an action-packed 1900s-era velodrome race turns into surreal, psychological race into the mind and soul of ‘Major’ Taylor.
To amplify the campaign, Hennessy enlisted modern-day luminaries – those who also 'Never stop. Never settle.’ across art, music & fashion - to help tell the story of this unsung hero.
Designer Kerby Jean-Raymond of Pyer Moss captures themes of inner rivalry in a cycling-inspired fashion collection
Artist & cycling enthusiast, Kadir Nelson, channels the spirit of the champion and memorialises his achievements with a modern-day monument
ESPN depicts the cyclist’s story through a contemporary lens in a powerful docu starring BMX influencer Nigel Sylvester, Ayesha McGowan, and more
“The story of Major Taylor is one of a dominant champion whose search for rivalry pushed him deeper into competition with his own self; it was thrilling to visualize the psychology of his chase for perfection,” said Executive Creative Director Alexander Nowak of Droga5.