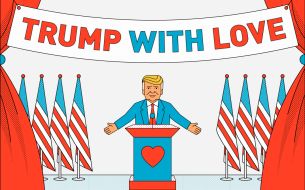 TrumpWith.Love is a website that encourages users to create their own video messages of love using Donald Trump’s words.  Launched on inauguration day, the goal of the website is to promote love, laughter, and unity, using words that fuelled hate and division in their original delivery.

To further encourage positivity, the site anticipates attempts at using negative and foul language, providing light-hearted Easter Egg responses to “Stop with the locker room talk and try again,” or watch as Trump hugs the American flag in an attempt to show you how to love.

The process of curating the word library was painstaking, and involved 30+ hours of viewing Trump rally speeches, debates, and interviews.

TrumpWith.Love started as a passion project between a bunch of advertising creatives.