Help The VIA Agency #GetItToBowie 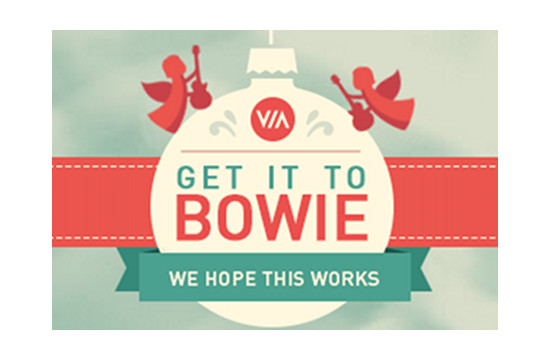 This holiday season, VIA is not only giving away the gift of music but is also hoping to make one of its own dreams come true. In a chestnutshell: VIA wants David Bowie to cover one of The VIA House Band’s holiday songs. The agency is taking to social media using the hashtag #GetItToBowie asking people to help them get Bowie's attention. VIA produced, wrote and created six original holiday tracks to support the cause. Tracks include “My Ex-Mas Hookup,” “Santa Big” and “Veteran’s Carol.” They've also created a video called "The Making of a Miracle" that highlights how they're going to "Get it to Bowie."

Not only are they asking their friends, fans and family to help get the word out, but also some of Bowie’s closest friends including Arcade Fire, Mick Jagger and Iman through a Twitter campaign. Check out the Get it to Bowie website here: http://getittobowie.com/