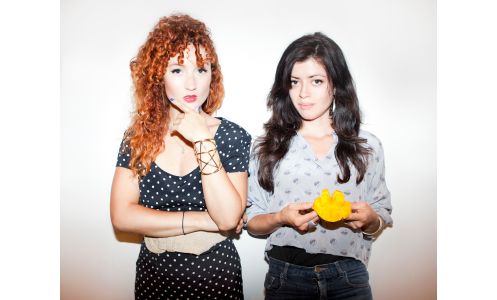 Venice and CA/NYC-based production hub HēLō has signed directing duo Purple Milk for their first commercial representation. Brooklyn-based filmmakers Natalia Leite and Alexandra Roxo joined forces in 2012 to helm an array of provocative content, ranging from feature documentary projects, TV pilots, web series, commercials and music videos. Recently, the duo directed three projects with Vice Media: a documentary called Serrano Shoots Cuba, a pilot for a show called Every Woman and holiday special about Nicola Formichetti’s NYC Christmas pop up shop. The newest project, the 10-episode Kickstarter-funded web series, Be Here Now-ish, which went live in April, is a new comedy about two sexually progressive New York gals who ditch their down-and-out lives for LA in search of a spiritual awakening. They are slated to helm their first narrative feature Bare, starring Imogen Poots and Riley Keough in the summer of 2014.

Notes HēLō Managing Director Brendan Kiernan, “Alexandra and Natalia are talented and dynamic storytellers with a genuine point of view and unique style. At HēLō  we’re looking for talent with an innate understanding of how to tell compelling stories for brands in the evolving world of digital and experiential advertising. We couldn’t be happier to bring Purple Milk onto the roster and look forward to working with them as they bring their original voices to the ad world.” Adds Purple Milk’s Alexandra Roxo, “We really like Brendan and Justin as producers and we are happy to be on a roster with such great directors. We’re excited to work with brands that target youth or women where we can approach advertising with the Purple Milk style and vision.”

Alexandra Roxo’s debut feature film, Mary Marie, is currently available on Netflix and was featured in Variety, New York Magazine, and the Wall Street Journal, among others. Her last script, Out of Range, was featured on IFP’s Film Week at Lincoln Center and was a Sundance Lab finalist. Her fashion films have screened at fashion week in New York and Miami Art Basel.

San Paulo, Brazil-raised Natalia moved to San Francisco at 18 and launched her career showcasing her art in local galleries. A two-time Sundance Screenwriters Lab finalist and a recipient of the Kodak Grant Award. Since moving to New York in 2006, she has directed music videos, documentaries, commercials and shorts that have screened in numerous festivals internationally.