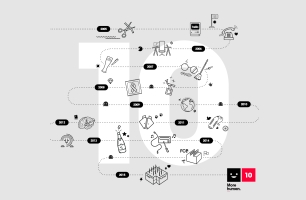 Ten years ago, a start-up called Hellocomputer was created. The belief was simple: digital would become an indispensable part of consumer’s lifestyles.

Over the subsequent decade, Hellocomputer has been driven by its passion to change the way consumers interact with brands online. It has also consistently defined itself through performance orientated creativity and has racked up an impressive tally of advertising and digital awards including 46 Loeries, 35 Bookmarks, eight FWAs and was shortlisted at the Cannes Festival of Creativity in 2014.

Hellocomputer was acquired by IPG in 2012 and now forms part of the FCB group of companies.

How are they feeling? “We’re pumped!” laughs co-founder and Group Executive Director Mark Tomlinson. “We are excited about authoring the next chapter.”

Ten years is a long time in an industry that is evolving, reinventing and progressing at lightning speed. Facebook and YouTube were just out the starting blocks and smartphones hardly existed in South Africa. Instagram, Pinterest, WhatsApp and many other household names were not even ideas yet. Social media was a buzz phrase associated with early leader MySpace. What this would all mean for brands’ was anybody’s guess.

“The world wide web was a very different place back in 2005. We had seen progress (since 1998, Tomlinson’s genesis in digital), but the brave brands exporting themselves into digital were not doing justice to the brand equity built in other channels,” says Tomlinson.

Governed by a classical appreciation for advertising, craft, and above all creativity its founders were drawn to the potential the new media landscape presented, but abhorred its absence of brand strategy.

“Technology has always been secondary to us. Ultimately everything Hellocomputer does is about moving people. We just happen to reach and interact with them through devices,” says Group Managing Director, David Moffatt.

“We’ve always believed that everything that can be digitised will be, and innovative agencies must understand and leverage that. But shouldn’t lose sight that it’s a person you are trying to move.”

Hellocomputer has constantly reinvented the business in response to the proliferation of consumer technology, availability of broadband, evidence of online behaviour and importantly progressions in digital media tools and software for targeting and buying.

“We love change,” says Moffatt, “and will continue evolving into the agency that brands need to partner with in this ever changing environment.”

According to Moffatt this will mean continuing to understand audiences while intersecting their existing behaviour with compelling creative messaging. Importantly a new level of context has been unlocked through technology. Time, location and intention lend a massive opportunity to marketers, this is where mobile technology becomes so critical in an increasingly connected world.

To leverage these possibilities, agencies must possess the ‘smarts and the arts’.

“We believe that the new traditional agency must feature in depth and digitally relevant strategic capabilities, abilities to crunch data in the pursuit of actionable insights, in house content creation capabilities, advanced technical prowess and media planning, buying and optimisation,” says Moffatt.

Tomlinson adds: “As the marketing landscape gets more complex, we are increasingly attached to our mantra of ‘injecting soul into digital’ as we are ultimately orientated by moving a single person’s behaviour. We are not building digital stuff for algorithms or devices. It’s for people, and hopefully to add value to their lives or make things easier, delightful, surprising or entertaining.”

Hellocomputer prides itself on its partnerships with long standing clients’ where a communal sense of exploration and commitment to results underpins the relationships. The company’s biggest clients include Toyota, Pernod Ricard, Cell C and Investec who are serviced from its offices in Johannesburg and Cape Town.