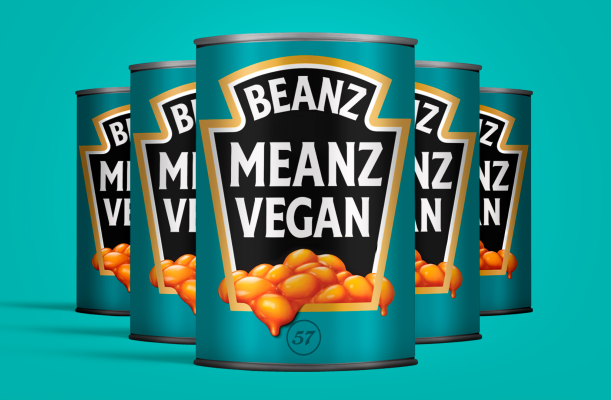 Heinz Beanz is throwing its support behind everyone tackling Veganuary this month in a new marketing campaign from Havas London.

A variety of encouraging, helpful and celebratory out-of-home, press and paid social ads will run throughout the month under the banner ‘Beanz Meanz Vegan’ – a timely twist on the brand’s iconic slogan ‘Beanz Meanz Heinz’ – in a bid to remind the huge number of Brits undertaking Veganuary 2020 that the much-loved food classic just happens to be vegan too.

The campaign will be supported by a limited-edition range of ‘Beanz Meanz Vegan’ cans, which are available exclusively from Ocado while stocks last. As well as raising awareness of its vegan credentials, the campaign aims to position Heinz Beanz as an easy, affordable option for those committing to a month of veganism this January.

Veganuary, which launched in 2014, encourages people to adopt a vegan diet for January and has been growing in popularity in recent years – with more than a quarter of a million people taking part in 2019. As part of this campaign, Heinz has also commissioned research to understand the biggest barriers and challenges of Veganuary in a bid to help those partaking in 2020.

These findings, which will be promoted through a PR campaign from Wonderland Communications, include:

- 80% of people have erred during Veganuary in the past – with 19% admitting it was the smell of something meaty like a bacon sandwich, 15% blaming a hangover and another 15% saying they simply ate something non-vegan by mistake.

- Despite this, of everyone who fell off the vegan wagon, 75% were able to climb right back on again and pick up where they left off, with only 10% saying they abandoned the diet completely.

- The top reasons people have found it challenging to adopt a plant-based diet were identified as missing their favourite foods too much (30%), the inconvenience of making or accessing vegan foods on a daily basis (20%), and the high cost associated with a vegan diet (18%).

The campaign will spike this Saturday, 11th January – pinpointed as the single toughest day of Veganuary, according to this new research.

Emily Wright from Heinz Beanz said: “There’s a general perception that being vegan means you have to spend lots of money on fancy foods, but being vegan isn’t all kale and quinoa. That’s why we want vegans to know that our classic Heinz Beanz can still be enjoyed this Veganuary, whether on a simple piece of toast or a delicious baked potato. Not forgetting all the other varieties in our vegan range, including Heinz Beanz No Added Sugar and Heinz Beanz Peri Peri. This year we’re here to support everyone tackling Veganuary and want to make it Easy Beanzy!”

Mark Whelan, chief creative officer of Havas UK, adds: “Heinz Beanz are an easy and simple solve for Veganuarians so we wanted to keep the language just as simple. It looks so great in that iconic design”