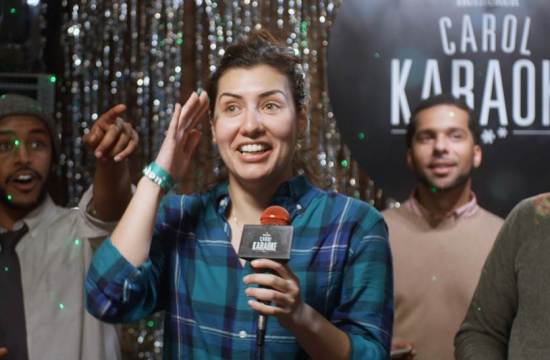 This week, Heineken debuts their latest test to inspire people in a “will you or won’t you” moment, with a challenge fit for the holiday season – Carol Karaoke.    People who thought they were enjoying an evening of karaoke with a small group of friends were suddenly surprised with a challenge to sing a holiday carol to an audience of thousands way beyond the karaoke room, the results of which are captured in a video now live at http://www.youtube.com/carolkaraoke.

Heineken invited unsuspecting New Yorkers for an evening of Carol Karaoke at Karaoke Boho in the NYC’s West Village– as long as they promised to sing one carol.   People were asked to choose a carol from “Jingle Bells,” “Deck the Halls” and “The 12 Days of Christmas,” and then in a surprise twist, were challenged to sing to thousands of strangers. Those who decided in a matter of seconds to keep singing were broadcasted in well-known public places, including a Jumbotron at an NBA game, on the TV of every NYC taxi for a week and on a famed Times Square billboard.

“With Heineken Carol Karaoke, we wanted to see if people were willing to cross their borders by challenging them to sing a carol they may not know to an audience of thousands of strangers,” said Colin Westcott-Pitt, VP Marketing, Heineken. “They had to make the decision to sing in mere seconds, and we found some real holiday heroes.”

Many surprised singers at the Heineken Carol Karaoke event rose to the challenge, yet a survey, conducted by Wakefield Research for Heineken*, revealed that a majority of American men say singing karaoke is less embarrassing to an audience of family and friends (55%) than belting a tune in front of strangers (45%).

“Karaoke is all about summoning the nerve to get up there and perform – and Heineken’s Carol Karaoke perfectly captures that moment of tension,” says Rob Sheffield, karaoke expert and third-time memoirist of the recently released Turn Around Bright Eyes:  The Rituals of Love and Karaoke.  “Whether you're singing for eight people or 80,000, the basic karaoke question is the same: Do you rock the mike or not?”

If you want to rock the mike and be a crowd pleaser at this year’s holiday party, Heineken’s Carol Karaoke survey found you may want to keep it classic – Americans list their favorite holiday tune to sing as “Jingle Bell Rock” (31%), followed by “Winter Wonderland” (20%). For those who want to flex their vocal cords, a little Mariah Carey will go a long way – the third most favorite song to sing is “All I Want for Christmas is You” (13%).

Wieden + Kennedy New York, Heineken’s creative agency-of-record, created and produced Carol Karaoke, including the event and video documenting the challenge that debuted on YouTube.com/carolkaraoke.  Brand fans are invited to join the conversation with #CarolKaraoke.