Heineken, Steve Miller and Rothco on ‘The Search’ for the Spokesperson that Has It All

Trends and Insight 954 Add to collection

There’s nothing like getting together over a nice, cold beer – as the marketers, creatives and production crew behind this new Heineken campaign prove 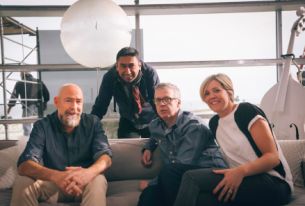 In a fresh approach to the client- agency relationship, HEINEKEN’S global brand communications team is launching Heineken Light in partnership with Dublin Based agency, Rothco. In 2015 HEINEKEN and Rothco launched Rugby World Cup campaign, ‘It’s your call’, working together to drive the campaign for the tournament from the local market in Ireland across the globe. Following the success of the partnership, the European brewing giant has since launched cider brand Orchard Thieves, and now Heineken Light, with the agency.

The latest campaign sees renowned director Steve Miller take the helm on a new series of comedic commercials for the brand. Finding the perfect spokesperson for the light beer that has it all isn’t easy… but it is rather funny. Chatting with Steve Miller, Rothco Executive Creative Director Alan Kelly, HEINEKEN Global Brand Communications Director, Anuraag Trikha and HEINEKEN Ireland Marketing Director, Sharon Walsh, LBB gets an exclusive insight into the shoot and the inner workings of the close-knit relationship of agency, client and director.

LBB> Alan, how did the idea behind the hapless characters come about?

Alan Kelly, Executive Creative Director Rothco> Well, we all loved the idea that this was the beer that has it all - it’s got all the benefits of a light beer and the taste is unbelievable. To bring the campaign to life, it was going to need a spokesperson that had it all too. Dealing with the lighter side of Heineken, we thought it would be apt of Heineken’s witty personality to show that the search for this spokesperson wasn’t going to be easy. Hence we created a series of characters, with universal humour, that we could have fun with.

Certainly from Rothco, and at least from Sharon and Anuraag in Amsterdam, we all agreed on our favourite three. There was that universal humour so it was an easy choice in picking these characters that we’ve got now.

LBB> Who is the target market for Heineken Light in Europe?

Anuraag Trikha, HEINEKEN> In Europe we’re expanding the reach of our target market with this lighter product which still maintains the distinctive taste. That’s why there’s this idea of a brand that ‘has it all’. It came from Rothco and really gave us the opportunity to expand our consumer base. We are looking at consumers who are much younger and more diverse who are looking for something that’s healthy but also delicious with a little bit of alcohol.

Sharon Walsh, HEINEKEN > From a European perspective, Ireland will be the first country in Europe to launch. In Ireland, Heineken is by far the biggest lager brand on the market, with around 50% of the pub trade. It’s a huge brand with a loyal following and high equity with Irish males. Ireland felt like the right place and also the right time to extend the brand. It’ll target current Heineken drinkers but also new people to bring into the franchise because it offers a new drinking occasion.

LBB> Alan, what’s the atmosphere been like on set, bringing these characters to life?

Alan Kelly, Rothco> Working with Steve has been brilliant. The atmosphere that he creates in a casting session and on set is so relaxed. He’s the most chilled out director I think we’ve worked with and that emanates from him onto the set. It’s a really relaxed set, which is great for the agency and client, and it’s brilliant for the actors because they can play the role with freedom. Everyone is very culpable and feeds in ideas no matter who they are on set – whether you’re the director or the actor or the client. It’s a very collaborative atmosphere, really stress free.

LBB> Steve, what has your experience been like working with Rothco and HEINEKEN?

Steve Miller, Director, Radical Media> It’s been an absolute pleasure. There’s been great collaboration. You often hear the word ‘committee’ and there’s a negative connotation to that but there can be rare and beautiful exceptions - and this is one of them! We’ve all worked really well together.

LBB>Steve, you’ve worked with a Heineken brand before, Dos Equis, on the ‘The Most Interesting Man in The World’. The campaign was so successful and ran for many years. How did the casting process compare for Heineken Light?

Steve Miller, Radical Media> In theory, my casting process is the same. I have to make every character live as its own entity and carry a new story. Heineken Light is a set of new stories. Of course, there are universal things that apply when finding the right players for the role. However (without sounding too wanky) there’s not a one-size fits all comedy formula. I go on intuitive feeling when searching the right actors.

LBB> Steve, comedy comes naturally to you but were there any specific influences or references you used to inject that Heineken charm into the film?

Steve Miller, Radical Media> What I always try to do with good writing like this, is put it in the most universal, relatable form. The comedy that works best always has another truth – and it’s always pulled from something we can all relate to.

These films are about the humour of making the best out of an awkward situation. This is what I saw in both sides of the storyline, from the hopeless ‘actors’ to the disgruntled ‘director’. They’re all working really hard to save face and it’s a situation anyone can relate to.

LBB> Steve, what appealed to you most about the script when it first came over and how did you approach the comedy in this ad?

Steve Miller, Radical Media> Rothco and HEINEKEN have written some really funny people into the storylines.  They’re great characters and you can’t do anything with performance unless you have great characters like we have here.

In terms of the humour the ‘director’ character in these stories is really a bass note. The higher notes of comedy usually come from broadly drawn characters. I don’t do broad. However the characters themselves are hyperbolic in terms of the way they’re drawn. To avoid that broadness you need to bring that type of character down and dry out the comedy by having them be real in the situation. That’s what makes it funny. For me, it’s about finding the truth in any situation and then allowing the performances to be all about that.

Anuraag Trikha, Global Brand Communications Director, HEINEKEN > I love the idea of the bass note – the director who’s supposed to be like a young Philip Seymour Hoffman. He’s got this really dry wit, which instantly reflects his exasperation with the talent. He’s a consistent presence throughout all three commercials. It’s unique and universal but also highly relevant. That's the beauty of this campaign.

LBB> What was the most challenging aspect of the shoot?

Steve Miller, Radical Media> Well, asking a man to continuously take his shirt off is…interesting! Fun for the ladies and confusing for me. It was really fun to create the environment he was in. One of the things that was important for me was for the characters to be connected to their environment. So we created an atmosphere that was over the top. It’s premium and kind of ironic.

Sharon Walsh, HEINEKEN > We’ve captured so much great material this week. There are side stories and back stories that are just so funny. I think the challenge for us is going to be selecting what we can use and how far we can stretch it! The digital and social campaign is a great platform to be able to bring a bit of fun and extend the idea for consumers.

LBB> Sharon and Anuraag, how has this shoot been from the client perspective?

Sharon Walsh, HEINEKEN > It’s been fantastic. Collectively we didn’t expect so much great content. The characters have provided so much added humour. It’s very funny and completely spot on with what we hoped for the tone. It’s been perfect.

Anuraag Trikha, HEINEKEN > What’s beautiful about the partnership between Rothco, HEINEKEN Global and HEINEKEN IRELAND, is that we have reached a level of confidence and trust in each other having worked closely together last year on the HEINEKEN Rugby World Cup campaign. It’s a pleasure to be doing this for a second time with Heineken Light.

LBB> Why did the global office choose Ireland for this launch and how?

Sharon Walsh, HEINEKEN > It’s quite unique in the FMCG market that smaller countries can have the opportunity to work on big, scalable global campaigns alongside the global team. It’s a great opportunity and a great system that we have at HEINEKEN. It’s not just all led out of the head office.

Anuraag Trikha, HEINEKEN > The idea is born for the need, which is local, then we’ve identified something that is globally and universally relevant and distinctive. We’re trying to build a model here that’s un-replicable and highly scalable. I think that’s the strength of HEINEKEN as a company. We’re able to find guys we can collaborate with no matter where we are. There are no barriers here. And I think with Rothco they have demonstrated again and again that they love doing work for their market that can travel.