Heineken asks the public to sign a pledge to swim in first-of-its-kind floating pool, offering $100,000 in support when goal of 100,000 pledges is reached 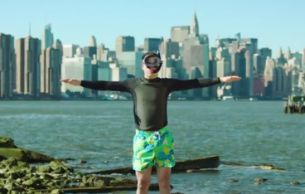 Heineken is upping the ante for year three of The Cities Project, beginning with a partnership with + POOL to help create the world’s first water-filtering, floating pool in New York.

The Cities Project by Heineken helps bring to life projects that make great cities even greater. To kick off this year’s campaign and to provide insight into the types of projects it will support in 2017, Heineken is partnering with + POOL to help bring their idea – developing an Olympic-sized, water-filtering, floating swimming pool in New York’s river – closer to reality. To support the initiative, Heineken has also partnered with Tribeca Film Festival to raise awareness of the project and engage fans nationwide with a virtual reality documentary developed by Tribeca Studios.

“The Cities Project by Heineken is all about making great cities even greater, and we have a special connection to New York’s waterways, since traversing them to become the U.S.'s first import beer following prohibition,” said Raul Esquer, Brand Manager, Heineken USA. “Following up on our recent successful projects, including San Francisco’s Bay Lights Bridge and Miami Marine Stadium, we encourage everyone – not just New Yorkers – to show your support, and to help us Brew a Better World by bringing + POOL to life.”

Heineken is asking the public to get involved by visiting www.SwimInTheRiver.com,  where they can pledge to reclaim the river and swim in + POOL when the project is complete. If the goal of 100,000 pledges is met, Heineken will contribute $100,000 to the project’s development. The campaign will continue to generate grassroots interest in the development of the project, which launched through crowdfunding in 2011. A teaser video, created by Tribeca Studios, explaining the partnership that debuted on Earth Day at the Tribeca Film Festival (April 22, 2017) is available here. Heineken has partnered with Tribeca as the official beer of Tribeca Film Festival. Heineken will have an activation at the Tribeca Lounge at Spring Studios, and will be poured at all official events throughout the Festival, which takes place from April 19-30, 2017.

Throughout the summer, Heineken and + POOL will provide more opportunities for fans to get involved and experience the project’s possibilities. Heineken is linking up with Tribeca Studios on a documentary film about + POOL and New York’s waters, which will be released this summer. Each year, an estimated 27 billion gallons of raw sewage flows into the rivers surrounding New York. + POOL will filter out contaminants, cleaning up to a half-million gallons of water each day to create swimmable water in a floating pool. A separate VR, 360 video will show people what it will be like to truly reclaim the waters of New York City, and to swim in + POOL.

“What Heineken and +Pool are doing to reclaim the river is extraordinary. We are proud to have the Tribeca Film Festival as a partner in this initiative. Tribeca Studios will be telling the story of + POOL through innovative storytelling with the goal of moving audiences to take action and pledge to support + POOL, an initiative for enjoyment for all New Yorkers,” said Paula Weinstein, Executive Vice President of Tribeca Enterprises.

This August, Heineken’s support will also help realize a major public artwork on a New York river: a light installation, scaled to the size of + POOL, will colorfully illuminate and respond in real-time to shifts in water quality, educating New Yorkers about the state of their river. All of the projects and the progress of + POOL’s development can be followed on a newly designed website launched with Heineken on Earth Day: www.PlusPool.org.

“Despite being surrounded by water, the millions of people in New York are currently unable to enjoy it the way they should,” said + POOL Co-Founder Archie Lee Coates IV. “By partnering with Heineken and generating even more grassroots support through public pledges, we can show city and state leaders how passionate people are to see the project become a reality.”

As the beer that is enjoyed in the highest number of cities around the world, Heineken launched The Cities Project in 2015 and has supported initiatives and programs like James Murphy’s “Subway Symphony” in New York, Leo Villareal’s “Bay Lights” in San Francisco, Southern California’s Beautify Hollywood project and most recently, the renovation of Florida’s famed Miami Marine Stadium.

Learn more at www.SwimInTheRiver.com. + POOL is one of many innovative projects that Heineken will support in America’s greatest cities throughout 2017. More partnerships and ways to get involved will be unveiled during Spring 2017.