W+K Amsterdam follows up Odyssey TVC with a bit of smart PR... 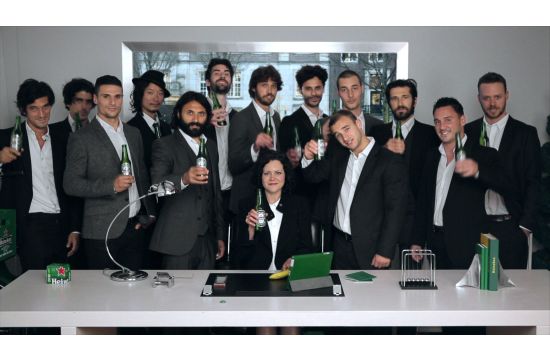 Last week W+K Amsterdam revealed their latest campaign for Heineken, the Odyssey, in which 20 non-actors took the role of the central protagonist. Today sees the launch of the second part of the global campaign, a tongue-in-cheek online film and interactive version of the TVC that proves that every man is Legendary at something – including the 20 men featured in the TVC.

For the last few years Heineken has introduced the world to some pretty impressive chaps. However, this latest extension of the brand's ‘Legends’ platform cast non-actors to play the central protagonists in the TVC for the first time ever, giving 20 real talents the stage to prove that every man is legendary at something.

But following the TVC's launch some questioned whether the 20 guys really are as skilled as portrayed to be… As such, today sees the launch of a cheeky PR film that responds to these naysayers and verifies our 20 legendary guys. An interactive version of the TVC also allows viewers to explore the casting sessions of each man in full.

According to Wieden+Kennedy Amsterdam Creative Directors, Thierry Albert and Faustin Claverie, the goal was to build upon previous work for the brand in an accessible and relatable way. “For the last few years Heineken's Open Your World campaign has introduced the world to some fairly legendary characters. Men who know their way around. Resourceful, multi-talented and seemingly capable of navigating any situation with aplomb. Spontaneous flute solos, knife-throwing skills and border crossings are all in a day's work for the Heineken Legend. In the Odyssey we wanted to acknowledge that the men of the world who have been depicted in the previous work, while amazing, were perhaps too amazing. Maybe it's a stretch to imagine that any one man can be so remarkable. But every man is pretty damn good at something."