Campaign from Cummins&Partners follows 'Man Up' TV documentary on ABC 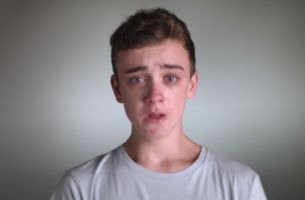 The 3 part 'Man Up' TV documentary series shown on ABC concluded last night.  In the series, Triple M's Gus Worland explores what the contributing factors are to the alarming rates of men's suicide in Australia.  To see his adventures head to manup.org.au.

At the conclusion of the documentary Worland decided that he wanted to communicate with everyday Australian men via an advertising campaign and encouraged them to talk and express themselves, especially when feeling down. The ad 'Man Up. Speak Up.' was created with the assistance of Adam Ferrier (Cummins&Partners) and Adam Hunt.

Says Hunt: "There is nothing more powerful than men seeing other men cry - because it happens so rarely in media, advertising, and real life.  Most blokes think they have to go behind closed doors before they can let out a tear. We wanted to 'out crying', and make it OK for guys to express themselves.  The extreme close up, on a faded background aims to bring out the emotion of all the men involved - so you connect and feel what they feel."

Says Ferrier: "All little boys and girls cry, it's necessary for survival. However, at some stage in their development many young guys learn it's not ok to cry or express themselves.  We wanted to reflect back the absurdity of this situation."

The documentary, ad, and overall project was supported by Movember and the University of Melbourne.
view more - Creative