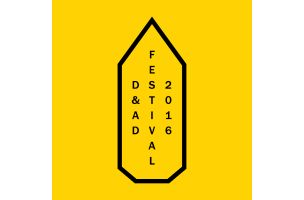 The D&AD Festival, which launches for the first time this April, will this year welcome world-famous Founder and CEO of WPP Sir Martin Sorrell, Oscar-winning graphic designer Annie Atkins and British artist Ralph Steadman as headline speakers for this exciting inaugural event.

D&AD CEO Tim Lindsay commented “D&AD has always taken great pride in celebrating the breadth of creativity in all of its forms and we are hugely excited to welcome these inspirational leaders in the fields of advertising and design, to set the agenda and lead the conversation, at this our first D&AD Festival.”

Visitors to the Festival will see Sir Martin Sorrell in conversation with Tim Lindsay, where they will discuss his career journey, his views on the future of the industry and WPP’s support for the D&AD New Blood Academy. The audience will then have a chance to put questions to the chief of the world’s leading advertising and marketing services group, in what promises to be a collaborative and fascinating look at the evolution of the industry.

Sir Martin Sorrell said of his relationship with D&AD “When I first spoke at D&AD twenty years ago, I did so because the organisation stood for excellence in commercial creativity and that was what I wanted (the then still-youthful) WPP to stand for too. Two decades later D&AD remains the kitemark for quality in our industry, and WPP has done OK as well. I am particularly pleased that WPP and D&AD are now partners through the New Blood Academy, which provides great opportunities - via placements at our agencies - for the next generation of creative talent.”

Annie Atkins, known for her Oscar-winning graphic design work on the Grand Budapest Hotel directed by Wes Anderson, will talk about the role of design in film. She will cover everything from introducing the role of a graphic designer, to their responsibilities on set as well as the creative process of creating new designs and artworks for film.

Ralph Steadman will take part in a live-stream Q&A with D&AD President Andy Sandoz from his studio. Attendees will be given a rare insight into Ralph’s previous projects as well as being able to observe him create a piece of art before their eyes as the interview takes place. The session will culminate in an auction of this piece of work to the audience, with all proceeds going to the D&AD Foundation.

More headline speakers will continue to be announced over the coming weeks, check: www.dandad.org/en/professional-awards-judging-week

The rest of the festival is continuing to come to life with speaker slots confirmed from the following globally renowned creatives and organisations:

- Kevin Allocca, Head of Culture and Insights at YouTube

As well as headline and speaker slots, visitors to the D&AD Festival will be able to take part in Insight Sessions that cover many of the key categories from the D&AD Professional Awards. With a well-balanced mix of advertising and design crafts, attendees will be able listen to and contribute to the debate on subjects as varied as graphic design, film, PR, technology and creativity for good. The aims of these sessions are to make clear the judges’ opinions, key themes, ideas and learnings from the winning work that has been on display at the Festival.

D&AD will also be looking to set the agenda for the future of the creative industry, with talks that focus on artificial intelligence, gender and diversity, technology and surveillance as well as looking at how we can lead the industry to do better by changing the way that we work with brands.

In the New Blood corner, there will also be some not-to-be-missed action, with the launch of the Foundation Council and a curated exhibition of winning work from the New Blood Awards. There will also be talks and activities bringing today's celebrated creative superstars together with the students getting ready to make their mark and workshops for young people from local schools, giving early insight into creative industry careers.

This is only a sample of what is to come, with four stages for talks and panel discussions, over 40 speakers from the world of design and advertising, sensory installations, fringe events, food stalls, photography exhibitions, film screenings, workshops and a few parties, it will be the ticket to the most exciting event in town.

Especially curated for creative professionals, the Festival runs from the 20-22 April 2016. A three-day ticket will cost £185 (£92.50 Members/ £55 Students) and will enable an all-access pass to all main and fringe events. An edited version of the festival will run on the Saturday and Sunday, with free entry to the general public and a family-friendly series of events, making D&AD Festival the most inclusive award experience around.