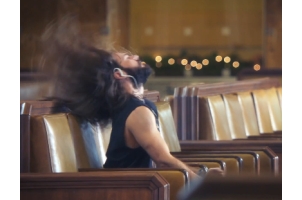 The Recording Academy and TBWA\Chiat\Day have teamed for the eighth consecutive year to promote the 57th Annual GRAMMY Awards with an advertising campaign titled "The GRAMMY Effect." The 57th Annual GRAMMY Awards will be held on Sunday, Feb. 8, 2015, at STAPLES Center in Los Angeles and will be broadcast live in HDTV and 5.1 surround sound on the CBS Television Network from 8–11:30 p.m. (ET/PT). For updates and breaking news, please visit The Recording Academy's social networks on Twitter and Facebook.

"The GRAMMY Effect" campaign is built around the insight that what happens on the GRAMMY stage transcends the show itself, creating iconic music moments that ripple through all parts of popular culture. More than just an awards show, the GRAMMYs has a unique power to influence fans, artists, fashion, social media and music sales. This year alone, the Top 10 albums on the Billboard 200 were impacted following the 56th Annual GRAMMY Awards, while eight of the Top 20 songs on the Digital Songs chart were performed live on the GRAMMY telecast. The show also garnered 30.15 million viewers and 34 million social media impressions.

Three TV spots demonstrate the various ways in which these artists and their own GRAMMY moments have influenced music fans everywhere. The initial commercial shows several karaoke enthusiasts singing various renditions of Lorde’s GRAMMY-winning megahit "Royals," while emulating the dance moves performed by the artist herself at the 56th GRAMMY Awards. Other spots, highlighting the "GRAMMY Effect" inspired by Swift and Williams will be launched closer to the 57th GRAMMY telecast.

"In previous years, our campaigns have focused on the fans, or the artists, or the relationship that people have with music. This year, we want it to be all about the GRAMMYs itself," said Evan Greene, Chief Marketing Officer of The Recording Academy. "The GRAMMY Awards and the GRAMMY telecast are a cultural force, and we want to illustrate how the show — the people, the performances, the fashion, the fans, the scenes and the social chatter — permeate our culture and live on long after the lights go down at Staples Center."

"The GRAMMYs has long been a launching pad for new sounds, new artists, new trends and new ideas,” said TBWA\Chiat\Day’s LA's Chief Creative Officer Stephen Butler "This campaign celebrates the fact that the GRAMMYs is about more than making music. It’s about creating and celebrating cultural moments