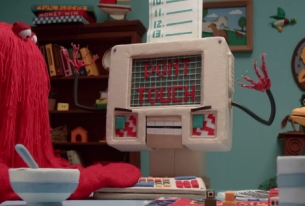 "If only there was some way to learn more information about the world!".

Your prayers have been answered; Don’t Hug Me I’m Scared is back and this time it’s here to teach you about the cyber world - it’s easy to be a smart boy if you can do it all digitally.

With the previous three episodes jointly amassing over 40 million views on YouTube and garnering a legion of devoted followers across the globe, DHMIS is an internet sensation. It was these dedicated fans who helped fund the Kickstarter campaign which made the series possible.

Produced by Blink Industries this journey to the digital dimension was created using a combination of puppetry, stop-motion and cutting-edge 3D animation. Music and lyrics were written by Becky & Joe and their long term collaborator Baker Terry.