'Have You Got Plenty Wet?' Asks Juan Sheet 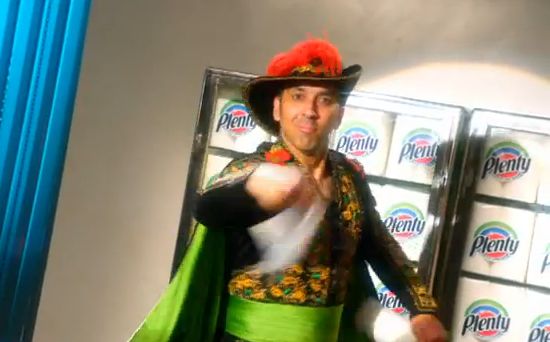 Plenty, the SCA owned brand, has launched a new advertising campaign to demonstrate the paper-towel's superior quality and versatility when wet.

Two adverts have launched on national television; ‘Swing Bing’ and ‘Height Chair’, alongside a press campaign. Further spots will continue the theme in August with ‘Cat Flap’ and ‘Santa’ in December. ‘Dog Mess’ and ‘Hell’s Angel’ will also be broadcast on the internet. In each, Juan Sheet is seen in a kitchen ‘studio’, answering queries from consumers who have written in with common tasks such as cleaning cat flaps, high chairs and kitchen bins - tasks that might normally be tackled with sponges or scrubbers. Juan Sheet demonstrates that through the paper-towel's unique structure, Plenty can tackle cleaning messes with excelled wet-strength.

“Wet-able, wring-able, strong as bull,” Juan Sheet reveals, ending each spot with the question: “Have you got Plenty wet?” They end with the strapline “One sheet does plenty”.

Joanne Mathers, SCA Brand Marketing Controller for Plenty, said: “We want people to demand more from a paper towel. Spills are just the start of Plenty’s greatness. In this new campaign, Juan Sheet shows in his incomparable style just how many different ways Plenty can be used when wet to effectively deal with all manner of tasks.”