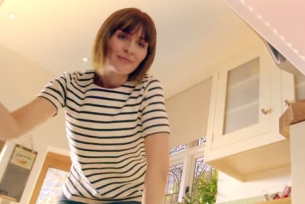 On behalf of BirdsEye, Havas Worldwide London has created a new TV ad to support the iFreeze, iSave campaign. Within the broader campaign BirdsEye focuses on leading the way in educating the nation that choosing frozen food, and freezing food, can not only help reduce food waste, but also save them money in the process.

The iFreeze, iSave initiative follows findings that reveal 1.9 million tonnes of food is wasted every year that could have otherwise been frozen and preserved for use at a later date. Aiming to help consumers save money through encouraging them to become more freezer-savvy, the brand is collaborating with a coalition of partners – including Love Food Hate Waste, Hotpoint and the British Frozen Food Federation (BFFF) – to raise awareness of Britain’s food waste issues.

The TV ad shows a young woman throwing away a fifth of all her fresh food shopping, illustrating the statistic that 20% of food is wasted in the UK every month. This amounts to £60 for the average family, in response to which the ad goes on to reference the iFreeze, iSave campaign and frozen food as an alternative. The media was handled by Havas Media and it is airing on national network TV, as well as VoD.

Commenting on the iFreeze, iSave initiative, Andy Weston-Webb, Birds Eye UK Managing Director, comments: “We’re incredibly excited by this campaign as we understand the pressures families are under to save money. Reducing food waste by making the most of the freezer will not only help families to do so but it will also help the UK to become more sustainable and resourceful, something we’re very proud to be a part of.”

Russ Schaller, Creative Director at Havas Worldwide London, commented “Many UK shoppers are unware of the amount of fresh food that they waste and the cost they incur because of it. By showing what this would look like if we were to literally throw a fifth of our food purchases in the bin we’re able to raise awareness of the issue, and encourage British families to save some money by making smarter shopping choices. It's more proof that underscores our commitment to move brands from promise to purpose.”