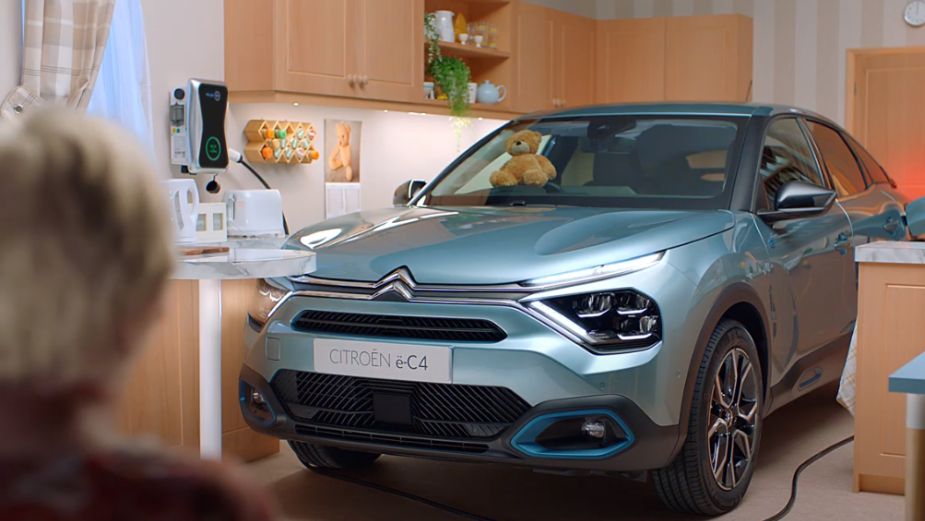 The Goggleboxers turn their critical powers on the New Citroën ë-C4 – 100% electric in a new campaign created by Havas London in collaboration with Studio Lambert, working with 4Sales – representing the first time that the families have been used in the marque’s advertising.

The stars of Channel 4’s long-running fly-on-the-wall series appearing in the ad are Mary & Giles, Marcus & Mica, Jenny & Lee and Pete & Sophie, and they are all filmed in the same rooms that viewers see each week. Like the show, the cast were unscripted in their commentary, with the pairs joking between themselves and commenting on the good looks of the New ë-C4, which is a battery electric version of the recently launched New Citroën C4 hatch.

The twist here is that, for once, we get to see what they are seeing as the camera cuts to their point of view – revealing that they’re not watching television but reacting to a real life New ë-C4 that has materialised in the room with them. Even Jenny & Lee’s static caravan has mysteriously expanded to accommodate the car.

This is the first time that Citroën has included famous faces in its advertising and this move is a way for the brand to cosy up to British culture with a smile and a nod with the TV commentators. These icons of fun and cosy familiarity are a change to car marketing which rarely includes well known faces in their recognisable environments.

It ends with the strapline ‘the French car that speaks your language’, which was created by Havas for Citroën and first appeared earlier this year.

The ad will premiere exclusively on Channel 4 during tonight’s Celebrity Gogglebox, and will continue to run on TV, online video and social media for a two-month period. Along with the full, 60-second film, there are 30-, 15- and six-second edits. Media is through Mediacom.

Nicola Dobson, Marketing Director at Citroën, said: “We know how much love there is for the Gogglebox stars with their no-nonsense approach to appraising some of the UK’s most popular programming. This forms a perfect synergy with our Citroën 'The French Car That Speaks Your Language' campaign where we are keen to cut out the jargon often associated with car buying. We thank Havas for orchestrating this Gogglebox campaign that perfectly complements our Citroën brand values”

Mark Whelan, group CCO at Havas UK, said: “No one better embodies speaking the language of the UK than the Gogglebox stars. It was so great to just let them do their thing and it result in such a standout piece of work.”

Mike Cotton, co-executive producer, Studio Lambert: “It was great to collaborate with Havas and Citroen on this project. It was a slightly different concept for us, and our cast loved taking part. There was also a lot of fun to be had in letting viewers see what could be the 'other side' of the room”.

Kirsten Gillard, agency and client sales leader, Channel 4 said: “This collaboration is a fantastic example of how clients are using our hugely popular programme brands to create entertaining ad campaigns that capture our audience’s attention, featuring talent that they love!”