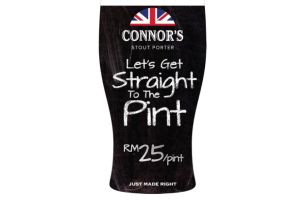 Havas Worldwide Malaysia has launched a new campaign for Connor’s Stout Porter by Carlsberg, which is built around the creative idea of Straight to the Pint.

Targeted at consumers between the age group 25-40, the campaign seeks to position Connor’s Stout Porter as a no-nonsense beer that is just made right.

The creative team at Havas Worldwide discovered that all beer brands are asking people to achieve grandness, but people are looking for purposeless and candid interactions from their beer moments. The solution offered by the team is aimed at inspiring people to immerse themselves in these candid purposeless interactions with people they’re close with.

The three-month long campaign, which was launched nationwide in April will run across key media platforms including digital, print and OOH. 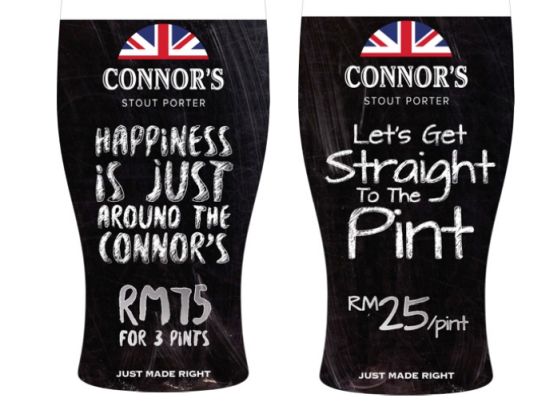 Creative execution for the campaign includes a series of chalkboards placed outside pubs and bars, which invited consumers to come in and enjoy a pint of Connor’s Stout Porter.

Additionally, the agency created an activation called “A Night Made Right”, a night-long of games, contests and casual fun for groups of friends, which was organized at bars across Malaysia.

As part of a Night Made Right, the agency created a promotion called “Pay What’s Right”, where there is no fixed price for a pint of Connor’s Stout Porter and consumers can pay whatever they feel is right for a pint.

Other plug-and-play activities include the “Slide-for-a-Pint” game, where consumers slide a Connor’s Stout Porter pint on a table ala curling and will win free pints if they manage to get the pint within the targets; and also “Share-for-a-Pint”, which involves taking a photo with props and sharing your photos on social media to win more free pints.