Made in partnership with animation directors Illogic, the spots are produced entirely with photo-real CGI 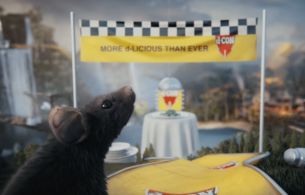 With mouse season on the horizon (November through March), Havas and d-CON have teamed up to take you into a fantastical world of mice from their point of view, where the baits are so delicious, they'll risk their lives for it.

Launching on September 20 via national syndication on TV and online, the campaign is the first to tout the newly reformulated d-CON bait since coming onto the market this month. Mice invasion generate lots of stress. The category historically focused on efficacy, but why does it matter if mice don’t want to eat it? Now d-Con is 10x tastier than the lead competitor.
Partnering with Emmy nominated animation directors Illogic to bring an elevated level of craft to the campaign, the spots are produced entirely with photo-real CGI, helping to bring our mouse and its household adventure to life.