Has Sainsbury's Just Won at Christmas with this WW1-Inspired Spot? 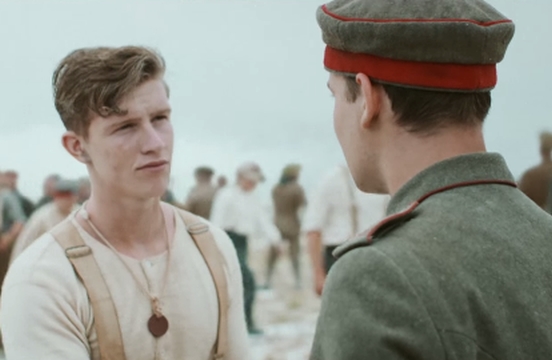 Sainsbury’s has unveiled a poignant new advertising campaign featuring an account of the 1914 First World War Christmas truce to screens in millions of homes.  Called Christmas is for Sharing, the full length 3’ 20” TV ad aired for the first time tonight in the Coronation Street ad break to help raise funds and awareness of The Royal British Legion’s work supporting servicemen and women.

Directed by Ringan Ledwidge, the advert is a creative interpretation of Christmas Day 1914, when British and German soldiers laid down their arms and came together on neutral territory to share greetings, treats, mementoes and even a game of football. Sainsbury’s and The Royal British Legion have sought to make the portrayal of the truce as accurate as possible, basing it on original reports and letters, as well as working with historians throughout the development and production process.

In the ad, the story is told from the perspective of a young British soldier who dares to venture from his trench onto No Man’s Land to greet his rivals and come together in a football game. He shares a moment of connection and friendship with a young German soldier and, as the truce ends and they return to their trenches, the German soldier is moved to discover that his British friend has hidden the gift of a chocolate bar in his pocket.

The campaign is the latest expression of Sainsbury’s 20 year relationship with The Royal British Legion. The chocolate bar featured within the advert will be available for Sainsbury’s customers to buy for £1 in the run up to Christmas, with all profits donated to The Royal British Legion.  The limited edition 100g Taste the Difference Belgian Milk Chocolate bar is manufactured in Ypres, Belgium, and features the same period packaging seen in the ad.

Sainsbury’s is one of the biggest supporters of the Legion and waits until after Armistice Day to launch its annual Christmas campaign so that stores can remain focused on raising funds for the Poppy Appeal. In 2013 alone, Sainsbury’s raised around £4.5m for the charity through hosting Legion volunteers instore to offer poppies, as well as from the sales of an exclusive range of poppy products and colleague, supplier and customer fundraising.

Charles Byrne, Director of Fundraising for The Royal British Legion, commented: “We’re very proud of our 20 year partnership with Sainsbury’s and this campaign is particularly important. 100 years on from the 1914 Christmas truce, the campaign remembers the fallen, while helping to raise vital funds to support the future of living. Established after the First World War, The Royal British Legion continues its work to support members of the Armed Forces, ex-Service men and women and their families, now and for the rest of their lives.”

Mark Given, Head of Brand Communications, Sainsbury’s, commented: “Christmas is a special time of year when people come together to share simple moments and kindnesses.  This year, we wanted to reflect that theme of sharing in our Christmas campaign through the lens of one of the most extraordinary moments of sharing in modern history, when on Christmas Day 1914, British and German soldiers laid down their arms, and came together on neutral territory to share stories, mementoes and even a game of football.

“The Christmas truce is an emotive and cherished story in our history that is especially poignant in this First World War centenary year. That’s why we have worked together closely with the Legion to ensure we bring this moment to life with authenticity and respect.

“We know many of our customers feel as passionately about the incredible work of the Legion as we do. We hope our campaign will raise awareness and funds for the Legion and inspire our customers to share a memorable Christmas with family and friends.”