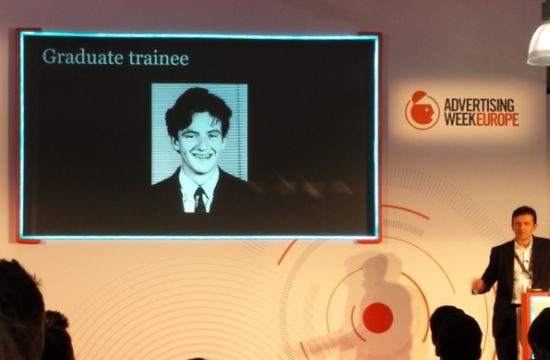 With the rise and rise of specialist agencies over the past couple of decades, it could seem like the romance between media and creativity is long dead, but at today at Advertising Week BBH CEO Gwyn Jones and Strategy Director Ben Shaw argued that the industry was slowly returning to a model similar to that of the ‘70s and ‘80s.

The pair presented “Full Circle. How advertising went on a journey and arrived back at the start” at London’s Bafta venue. The seminar kicked off with Jones – a BBH lifer – sharing a photograph taken of him in 1987 when joined the first intake of the agency’s graduate programme. He proceeded to describe the era’s dominant trends – a model which saw creative and media sit side-by-side and an obsession with data – and explain how, slowly but surely, these are creeping back into the industry.

“It felt like a very simple, connected, integrated way of working. It wasn’t to last – cracks started to appear and all good things must come to an end,” said Jones of the relationship between creative and media. “At the heart of most agencies back then was media and creativity…  As they drifted apart, the media business was much more aggressive at driving growth than sleepy creative agencies.”

Shaw then picked up the baton and explained that the gulf between media and creativity meant that the advent of digital had not resulted in the truly integrated advertising experience that had been predicted. “Digital should have been the glue that brought media and creative together, but that varied landscape resulted in more specialised agencies. Rather than the opportunity to create more connected advertising, clients are now in the role of man-managing, overseeing a roster of agencies,” he said. This situation, more often than not, he said, resulted in specialist agencies working together inefficiently, often sharing work in different formats and looking out for their own interests rather than the clients. “What you end up with is disconnected marketing with agencies competing for their own budgets.”

Using the number of  mobile-specific events scheduled during Advertising Week as an illustration, Shaw said that the specialisation proliferation showed little sign of slowing. “Mobile seems to be trying to stake a claim as another one of these specialisms, trying to install itself as a vertical rather than a horizontal, when it should be the glue,” he said.

However, he and Jones explained, many agencies – BBH included – are now moving back to a broader and more balanced model that includes strategy, creativity, media buying and production. This new model relied, he explained, on expanding creative capabilities to include PR, digital and experience and expanding the strategy and performance side of the agency to include skills more usually associated with media agencies such as search, analytics and social media. He also said that, speaking personally, he preferred that these new capabilities be addressed at an agency-level rather than an across-network approach, as he still very much believes in agency culture.

“We call it ‘connected selling’. Rather than deploying one piece of creativity, it’s about thinking about the eco-system of the brand,” he said.