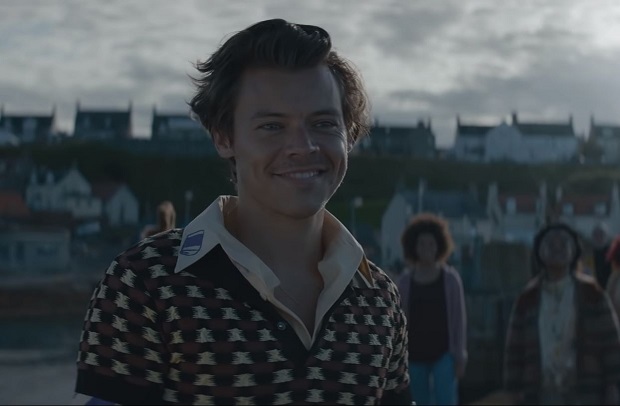 Directed by David Meyers and narrated by Rosalia, the seven-minute 45-second music video for Styles' track 'Adore You' was released to huge praise last week on 6th December.

The long format promo takes us on an unexpected journey filled with love, hope and some wonderfully salty seaside scenes. Hailed 'strangely beautiful' by NME the film is set on the fictional island of Eroda - a place narrator Rosalia tells us is 'shaped like a frown'. We hear the tale of a young boy who is outcast from the sullen seaside community for his dazzlingly bright smile. Having endured year after year of loneliness, he wades into the sea, in despair, with pockets full of rocks. But just before he takes a final plunge, a bright little fish jumps out of the water onto the rocks in front of him. An unlikely friendship blossoms between Styles and the fish. As his loneliness subsides and his heart grows, so does his fishy companion.  All at once, his friend is too big to look after and he must set him free. Finally, the people of Eroda come to Harry's side and together they help him put the fish back into the ocean. Faith restored, Harry uses a jar of bottled screams to sail off into the distance.

Perhaps one of the most unique music videos we have seen this year, the story has stirred much debate among fans and press about the deeper meaning of the story. For the British, the Isle of Eroda may look and feel surprisingly familiar. The Isle of Eroda is in fact Scotland. Speaking to Sarah Drummond, executive producer and managing director of LS Productions, she tells us there were three Scottish locations that were used to create they dream-like town. She says: "After working with Harry Styles on his first solo video ‘Sign of the Times’ it was great to welcome him and his team back to Scotland. We shot the video in and around Cockenzie, Port Seton and St Abbs, with the areas providing the perfect setting for the mythical Isle of Eroda."

The music video has amassed over 7.5 million views in the first three days of it being released. Later this week on Friday 13th, Styles and Columbia Records will release the hotly anticipated album 'Fine Line'.