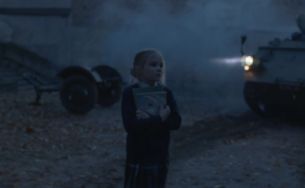 International non-governmental organisation Human Rights Watch and its ad agency, BETC Paris, want to raise awareness on the Safe Schools Declaration, an inter-governmental political commitment that was opened for endorsement by countries at an international conference held in Oslo, Norway, on 28 May 2015.

Released ahead of the Universal Children’s Day on November 20th, this film, directed by Reynald Gresset, shows the life of a schoolgirl while her school is being occupied by soldiers. The little girl navigates between the military men and struggles to find a place where she can be safe. The tense mood of the operation depicts the fear that endangered children can feel.

Around the world, schools are attacked or being occupied by military forces and armed groups in conflict zones. It endangers the lives of students, their teachers, and denies hundreds of thousands of children their right to education. Schools were converted into military barracks or bases in at least 26 countries with armed conflict between 2005 and 2015—the majority of the countries with armed conflict during that period.

The impact of armed conflict on education presents urgent humanitarian, development and wider social challenges. Worldwide, schools and universities have been bombed, shelled and burned, and children, students, teachers and academics have been killed, maimed, abducted or arbitrarily detained. Educational facilities have been used by parties to armed conflict as, inter alia, bases, barracks or detention centres.

The educational consequences of military use of schools can include high student dropout rates, reduced enrollment, lower rates of transition to higher education, overcrowding, and loss of teaching time. In many countries, armed conflict continues to destroy not just school infrastructure, but the hopes and ambitions of a whole generation of children.

The Safe Schools Declaration is an initiative by individual States to promote and protect the right to education and to facilitate the continuation of education in situations of armed conflict. It urges all parties to armed conflict to refrain from actions that impede children’s access to education and encourages Member States to consider concrete measures to deter the use of schools by armed forces and armed non-State groups in contravention of applicable international law.

56 states have already endorsed the Safe Schools Declaration. These states seek to ensure the continuation of education during armed conflict, support the re- establishment of educational facilities and, where in a position to do so, provide and facilitate international cooperation and assistance to programmes working to prevent or respond to attacks on education

The aim of the #ProtectSchools campaign is to get additional countries to endorse the Safe School Declaration and protect education from attack and schools from military use.