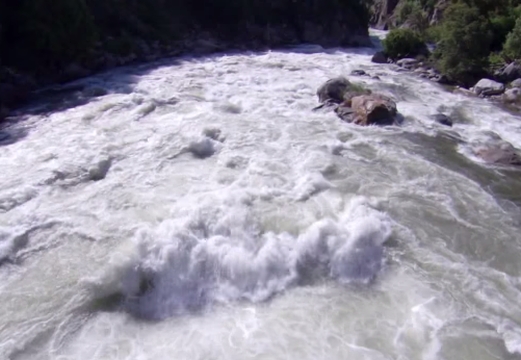 The campaign features a series of short films voiced by some of the biggest names in Hollywood including Penélope Cruz, Harrison Ford, Edward Norton, Robert Redford, Julia Roberts, Ian Somerhalder and Kevin Spacey. In the series, Nature reveals serious misgivings about the way humans are treating the Earth from the viewpoint of a cast of characters — from Mother Nature to The Ocean and The Rainforest.

"Every living thing on this planet needs me," states The Ocean, through the legendary voice of Harrison Ford who also serves as Vice Chairman of Conservation International.

"The future of nature is the future of us," said Conservation International Chairman and CEO Peter Seligmann. "Take climate change — one important way nature is speaking to us right here, right now. And as nearly 400,000 New York City marchers recently amplified, how we respond will determine our future. Our message is simple: Nature doesn't need people. People need nature."

Conservation International worked with the Audience Behavior Lab (ABL), a division of TBWA\Media Arts Lab, to create the campaign under the creative direction of TBWA\MAL Chairman, Lee Clow.

"We thought the idea of giving nature a voice, nature having been around billions of years longer than humans, might make it clear to all of us that the planet will evolve with or without humans. It's our choice," said Clow.

The campaign also takes aim at the current dialogue around environmental issues. "The environmental movement has missed the mark when talking about nature because it tends to present nature as something that is separate from people," said Dr. M. Sanjayan, Conservation International's executive vice president and senior scientist.  "By making it clear that people need nature to survive, we are turning the conversation around and making the movement relevant to entirely new audiences."

Recent polling suggests the campaign is particularly well-timed and needed. According to an American Psychological Association survey of high school seniors and college freshmen, younger Americans are less interested than ever in the environment and taking action to save nature. Only 20% of those surveyed from 2000-2009 expressed interest in involving themselves in cleaning up the environment.

Yet Gallup suggests public opinion might be on the cusp of turning in favor of the environment.  Americans are now more likely to say that the environment should be given priority, even at the risk of curbing economic growth. According to Gallup, this is the first time since the economic downturn of 2009 (except immediately following the BP oil spill in 2010) that Americans said they prioritized the environment.

The films will debut at SXSW Eco in Austin, Texas, and on www.natureisspeaking.org. Seligmann, Clow and Sanjayan will discuss the campaign at a SXSW Eco panel on October 8 at 3:30 PM.

To actively engage audiences in the conversation about the vital links between nature and human well-being, the films invite viewers to join the discussion by using #NatureIsSpeaking and each of the films' Twitter handles (below).

HP will give $1 to Conservation International, up to $1 million, for every use of #NatureIsSpeaking on Twitter, Facebook, Instagram, G+, Vine, LinkedIn, YouTube and Tumblr. Click here for details. In addition, HP has provided CI with HP Explore technology to track the spread of #NatureIsSpeaking and to monitor the conversation about nature happening online.

"Over the past two years, HP has been working with Conservation International on Earth Insights, an initiative that creates an early warning system for threatened species and enables us to better listen to nature," said Gabi Zedlmayer, vice president and Chief Progress Officer, HP. "Now, through the Nature Is Speaking campaign, we are encouraging people to connect with what nature is saying and spark a conversation that will create a better future for everyone."

In conjunction with each film, CI will publish a post to its Human Nature blog page, which will feature insights from Conservation International's executive leaders, field directors and scientists. These weekly posts will highlight CI's global conservation efforts that directly address the issues showcased in the Nature Is Speaking films and by the characters