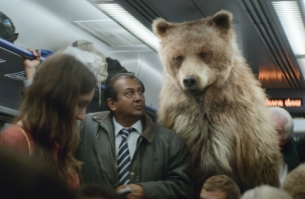 Center Parcs has unveiled a new TV advertisement as part of a broader £5m marketing campaign celebrating family time. The new 60-second TV commercial which includes digital and VoD activity, is timed around the travel industry’s peak booking season as families start to plan their family breaks, and will run until March 2016.

The film features a family of bears representing what human family life is like today: distractions, work challenges, concerns about quality time with their children.  In one scene, Mama Bear is stuck working late whilst Papa Bear is making dinner for the family and cubs are in other rooms of the house. The next day is a fresh start, as the family head out for a Center Parcs break.  As they approach the forest, the stresses of modern life fall away: they immediately connect with the natural environment, the feeling of freedom and getting back to what is important – being together.  The soundtrack, sung by Ben Madeley, is a beautiful rendition of “True Colours” which was first made famous in 1986 by Cyndi Lauper is also released through Universal on iTunes.

Colin Whaley, Sales and Marketing Director at Center Parcs commented, “Now felt like the right time to be bolder with the way we present ourselves. Families have been telling us that getting the balance between work, chores and quality family time is even more difficult nowadays and this was something that came out strongly from our research.  It was important to us that the campaign captured that rewarding feeling of having time and space to reconnect with each other. As a dad of three myself, I know how hard it can be juggling everything and prioritising what’s important.”

“We want to inspire people to carve out more valuable family time together not just during the Christmas period but in daily life too whether it’s a picnic in the park, family dinner time, bedtime stories together or a short break at Center Parcs of course!”  Colin concluded.

The new advert, “Bears”, differentiates itself from other short break destinations, in an idea conceived and created by creative agency Brothers and Sisters.  Ben Liam Jones directed the advert through Mustard, with Electric Theatre Collective responsible for CGI animation.  Media planning and buying is through Blue 449. Make it Rain handled online search, social content and engagement. The whole commercial took four months from concept to completion, including the animation which took 25 animators 10,450 hours over three months.  Studying footage of live bears to reference and capture their qualities in the advertisement, together with filming professional actors gave the director and production team the detail needed to create the animated ‘bears’ in photo-real CGI animation, when the bears were in ‘human’ scenarios such as the office and commute.  Krystian Godlewski, who plays the Mama bear character, is known for his film role as Groot in Guardians of the Galaxy; and Dan Phillips who plays the Papa bear character, appeared in TV dramas Between the Lines and Stella.  Four child actors and one adult stand-in were used for the girl and boy bear characters.

Matthew Charlton, CEO of Brothers and Sisters said, "We all spend too much time sitting with our families, in the same room, on different screens. Physically in the same place but mentally we are all apart. Modern life pulls family time apart and incredibly Center Parcs is designed to pull family time back together.   We can all see our own lives through this launch campaign and the characters of the Bears."

Grand Central’s Tom Pugh created the sound design for the spot: "The team behind the film did a great job with the visuals – the animation and the CG for the bears are top notch. My job was to bring those scenes to life, paint a natural picture and get the balance just right. The film starts off with a dark and lonely mood for the office shots, so the sound design had to reflect that tone.  As the action moves outdoors, I incorporated subtle, natural elements, such as water lapping, so that visual and sound work beautifully together.  The main challenge, from a sound design point of view, was to imbue the bears with a sense of presence, without making them sound aggressive. I'm really pleased with the end result."