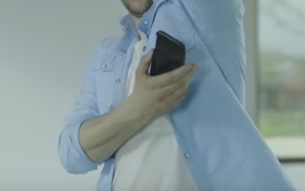 With a 40% smaller brain area that perceives odor versus that of females, the male olfaction is less sensitive on average. Combining this with the fact that males sweat more then females during intense or stressful activities and that our nose cannot smell our sweat, Nivea Men presented today their revolutionary project NOSE: the first mobile solution that enables smartphones to smell male human sweat. So Nivea Men helps men control body odor in order to give them confidence. Incorporating some revolutionary sensor technology and a state-of-the-art mobile application, NOSE will indicate if your “sweat status” is OK or deteriorating. The world premiere and first demonstration of the beta-version was hosted in Brussels today by the Belgian creative connectivity agency Happiness/FCB, which concepted and developed the idea with Nivea Men globally. Go to niveamennose.com to stay informed.

Males and their sweat perception

Neurologic research  revealed that, due to a sexual dimorphism in the human olfactory bulb, males have approximately 9.2 million male brain cells (neurons and glial cells) versus 16.2 million female brain cells in the specific brain area governing our olfactory senses. Combined with other research  indicating that males sweat more than females during intense and/or stressful activities and that the nose cannot smell a person’s own body odor or sweat, Nivea Men developed NOSE: a revolutionary sensor and smartphone technology to help men control body odor in order to give them confidence.

How does NOSE works?

NOSE combines revolutionary sensor technology with a state-of-the-art mobile application that enables smartphones to recognize human body odor and to analyze “sweat status.” How does it work? After activating the application and putting your smartphone near the armpit, NOSE starts smelling. The uniquely designed mobile phone cover contains the hardware that gives your smartphone the sense of smell and links this back to the phone via Bluetooth to the application. A learning algorithm benchmarks and evaluates the captured information and users then get a notification/message stating whether their sweat smells good or bad.

The Belgian creative connectivity agency Happiness/FCB concepted and developed the NOSE idea with Nivea Men globally. Geoffrey Hantson, chief creative officer Happiness/FCB explains why: “It’s a first globally to have a smartphone ‘smell’ sweat like the human nose does. Developing NOSE shows how we can further integrate technology in our daily care routines to creatively connect audiences with brands.”

Martin Wulle, corporate vice president, global business unit digital & e-commerce, NIVEA said, “Studies conducted by NIVEA show that men want products that are easy to use with immediate results. By adding digital solutions to our care products, like we did with NOSE, we can fulfill consumer needs innovatively for our Nivea Men range.”

Integrating sensor technology into mobile devices is an upcoming technology trend driven by the current business and consumer need for information, increased functionality and utility from their electronics and other devices.

As a specialist in the field, SPEC Sensors was part of the development team for NIVEA NOSE.  Brian Kinkade, VP new applications development from SPEC Sensors, on why this challenging project is a breakthrough for the Internet of Things: “The NOSE Smartphone solution demonstrates how our revolutionary gas sensor technology can impact everyone’s life by bringing low-power consumption and high-performance gas sensing to applications on consumer devices."

The beta-version of NOSE will be further tested worldwide this year. The app will be launched in the AppStore and GooglePlay in the next phase, with the launch date of the consumer version to be defined later.