Can an amateur handle the world's most prestigious cycling event 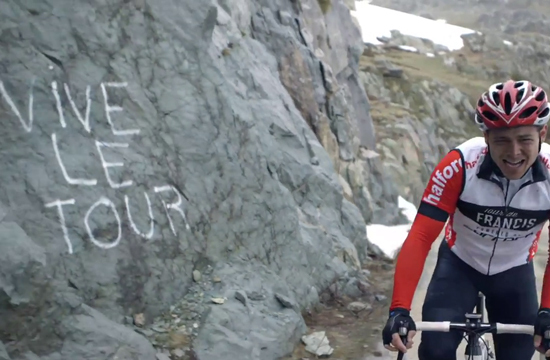 Question: could an amateur handle the toughest stages of the world's most prestigious cycling event, the Tour de France?
What's more, how would they fare on a Carrera Virago, a carbon-frame bike costing less than a grand (so it qualifies for the Government’s ‘Cycle to Work’ scheme). Now that’s a fair chunk of change but it’s a drop in the ocean compared with the bikes the pros ride.
Halfords and DLKW Lowe found an amateur willing to take on the challenge. His name: Dan Francis. And thus the ‘Tour de Francis’ came into being.
The tour was devised by Halfords’ creative agency, DLKW Lowe (creative directors: Jonny Watson and Dan Harrison) and consisted of four stages, borrowed from this year's Tour de France, beginning with the Prologue in Liege, Belgium.
It then moved south through the picturesque Champagne region, up into the French Alps and finally over the finishing line on the Champs Élysées in Paris.
We filmed Dan's every move from the moment we whisked him away from his family home in South West London, through city streets country lanes and a couple of hills. Well, mountains, to use the technical term. Total repairs on the tour: one puncture. True.
Click here to see the teaser for the 15-minute documentary to come, launching on June 30, coinciding with the start of the 2012 Tour de France.
As Halfords is sponsoring ITV’s coverage of the Tour de France, we've taken clips from the film and used them for the idents in and out if the ad-breaks during the live coverage on ITV4 and highlights shows on ITV2.
In total, 24 idents will roll out across the 3 weeks of Le Tour, each showing an insight into Dan Francis and his team on tour in Belgium and France.
The idents display the Halfords sponsorship message as well as the web address: Halfords.com/TourDeFrancis - the online hub for the campaign and the documentary.
Halfords will, be using their Twitter and Facebook channels to promote the film as well as following the real Tour de France and sharing their take on the race and comparisons with the Tour de Francis.
A Tumblr blog reveals more behind-the-scenes insight from the Tour de Francis, along with photos and videos from the shoot.
To view the work, click here: http://www.youtube.com/watch?v=9RQAqwqmtNc
Check it out athttp://tourdefrancis.tumblr.com/