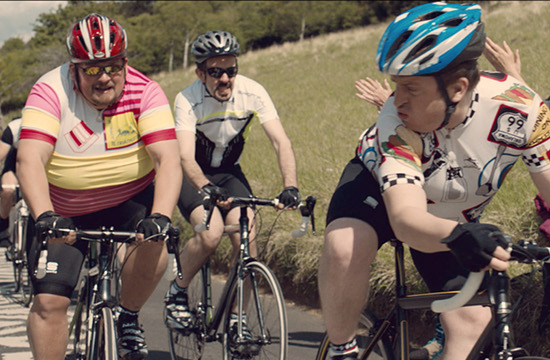 Halfords celebrates the surge in popularity of cycling post-Olympics in its latest TV ad.
The ad, by Mother, shows Britain’s cycling tribes, including MAMILs (middle-aged men in lycra), professional cyclists, commuters, hipsters, yummy mummies and little girls, all racing each other.

The work, called ‘Tour De Britain’, is the first by Mother since winning the business earlier this year. The brief was to create a summer cycling anthem for Halfords, the UK’s largest retailer of bicycles, showcasing its range of bikes.

The spot taps into the current wave of momentum behind cycling, following Team GB’s haul of Golds at the 2012 Olympics and Bradley Wiggins’ Tour De France victory, with more people from all walks of life getting on their bikes than ever before.

The ad shows the different tribes, also including mountain bikers, BMXers, Safety First riders and families, battling it out to get to the finish line.

As the race nears the end, the professional cyclists are leading the pack but a team of little girls, on Halfords’ Cherry Lane bikes, causes them to lose their concentration and crash. The little girls then ride to victory, and the ad ends with the line: “Halfords - Bikes for All”.

The TV ad, which breaks on Wednesday 18th June, will run in 40, 30, and 10-second versions. There is also a 60-second cinema spot and a two-minute online film.

Halfords Marketing Director, David Durie said: “Britain has definitely fallen in love with cycling and the activity is experiencing a new found popularity.  The advert shows the inclusivity of biking - there’s something in it for everyone and the passion with which different cyclists pursue their sport.

“More people than ever from all walks of life are saddling up and getting out of two wheels. As the UK’s largest retailer of bikes, Halfords wants to inspire cyclists of all ages and we offer a full range of cycles both in store and on line to cater for all tastes and needs.”

James Broomfield, strategist at Mother, said: “The ad is a summertime ode that celebrates all the various tribes of British cyclist and we hope will inspire viewers to get out there on their bikes. It’s a feel good celebration of the widespread joy of summer cycling; something the whole nation can rally around.”