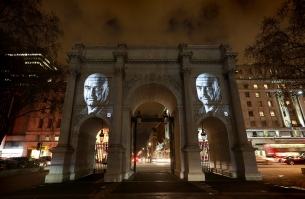 As George Osborne announces an extra £100 million worth of funding for driverless cars, leading taxi app Hailo has unveiled a series of ‘Face to Faceless’ portraits designed to stand up for the role of the driver and ‘remind the city that cabbies are part of its DNA’.

Projected onto landmarks frequently used to navigate the Capital by visitors, each taxi driver has been captured in a photographic style designed to represent their knowledge and the stories they can tell about London. Appearing on some of the most recognisable buildings in the city, the campaign shows how intricately weaved cab drivers are with the London experience and why this shouldn’t be threatened by faceless driverless technology.

Hailo CMO, Gary Bramall comments: “People don’t want robots; they need to know that their driver will get them from A to B safely and securely. Nothing can replace the relationship a passengers builds with their driver and we need to stand up for drivers.”

“Cabbies have been a part of this city for hundreds of years and the move towards driverless cars is killing not only an entire profession, but a huge part of Britain’s heritage.”