The Richards Group & Sonic Union beam down a starship of snacks. 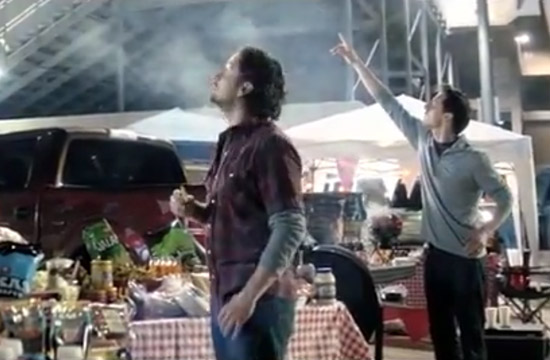 The Richards Group and Machine Head sound designer/composer Stephen Dewey team up with Sonic Union mixer Rob McIver to cast an extra-terrestrial spell on Super Bowl snackers in the cinematic :60 “Out of This World Taste” for H-E-B Grocery.

The spot, directed by Sugar Film Production’s Chris Smith, features a Texas community witnessing a series of seemingly inexplicable snack-related events that turn out to be the doing of H-E-B Grocery brand-loving aliens who also get their grocery fix directly from the store.  The spot aired in Texas during Sunday’s Super Bowl broadcast and an extended :90 version can be viewed online.  H.E.B. also has posted a series of behind the scenes videos on their YouTube page: http://www.youtube.com/playlist?list=PL7E78E68ADFA84B66&feature=plcp

McIver worked closely with sound designer/composer Stephen Dewey to create the unusual audio environment of the distant creatures, as well as the unsuspecting community. Said Dewey “The idea was for the spotto feel organic—and to have a quiet and suspenseful tone of displaced naturalsounds rather than a loud and synthetic vibe.  Rob’s deft mix was essential to preserve the build tointensity in our music and to not allow a dense palette of unique narrativesound elements be lost on the viewer.” To ensure that this organic and more relatable approach was maintained a human voice was used for the alien’s utterances in the final scene, steering away from the more extreme science-fiction genres.

“Out of This World Taste” opens on a shot of a man curiously surveying a newly-materialized crop circle as a television broadcast begins, “Strange occurrences are being reported all over Texas'.  We cut to a group of tailgaters, a young man pointing up, shouting, “Hey! Check it out!”  We see a mystical glowing light in the sky before cutting to a control room where a team of analysts is hovering together, listening to a suspicious audio sample.  Strange occurrences pop up all around, from a delivery truck parked on the roof of a high-rise to snack foods vanishing from household kitchens. The situation intensifies with increased bright lights shining down fromthe advancing U.F.O.

We cut to a mysterious circular assembly of stacked shopping carts filled with H-E-B brand products being surveyedby government officials, as an investigator notes, “They’re trying to tell us something'.  We inter cut between the cart sculpture and the crop circle reading, “H-E-B,” culminating with the investigator shouting upwards, calling “What do you want from us?!”

In the final scene, a teenage checker awkwardly laughs at the extraterrestrial standing before her in Texan attire as he casually converses with her in incomprehensible alien-speak.  The creature vanishes in a flash as weclose on the H-E-B logo accompanied by the voiceover, “H-E-B products.  Everyone wants them. Only Texas has them.”