Guten Tag Deutschland, I Am Very Happy to Be Here 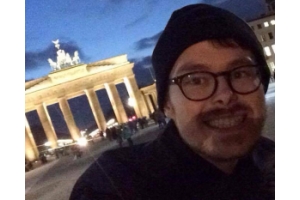 My first brush with Berlin came about a year and a half ago. I was in town for the Ciclope International Festival of Craft and on arrival at the airport, I purchased a ticket that turned out to be 10 times the price it should have been, for a train that was taking me to a far-flung German village that neither any of the train staff nor I had heard of.

Not a great start.

Eventually I made my way into Berlin from Flughafen Schönefeld and spent a genuinely brilliant few days meeting with adland’s global production folk and hanging out in Berlin’s endless, brilliant bars. It was the time I spent in Berlin post-Ciclope that had the biggest impact on me though. I stayed on as a tourist and fell for the lifestyle, culture, people and history that this place has to offer.

And here I am, writing this from my new Berlin apartment, heading up Little Black Book’s German adventure.

Why the move, I hear you ask? Well, first and foremost, Germany has always been a strong market for LBB. It flicks around between third and fourth in our country traffic stats, behind the UK and USA. But there’s still so much more we could and wanted to be doing here. So the LBB team and I figured, hey, why don’t we head over and do this properly?

LBB’s primary quest is to showcase local creativity to the global advertising industry, and so I want New Yorkers to see more heart-pullers like Jung von Matt and Edeka’s John Lewis-beating Christmas spot. I want the people of Vietnam to experience more seamless storytelling, like in VCCP and Airbnb’s tale of the fall of the Berlin Wall. Brazilians to know about Publicis Pixelpark’s hilarious butinnovative methods of getting people to stop peeing up walls. Australians and the charm associated with Saatchi & Saatchi Düsseldorf’s adorable Vorwerk spot! You get the picture.

While I’ll be based primarily in Berlin, that doesn’t mean to say I won’t be getting involved in all areas of German advertising. The market here is uniquely spread out and so I’ll be heading to Hamburg, Frankfurt, Düsseldorf, Munich and Cologne to meet as many of you folk as humanly possible.

In the meantime, it’d be great to chat, say hi, hear what you’re up to and tell you a bit more about LBB. So please do drop me a line at addison@lbbonline.com

PS: I like to have my fingers in many pies and will still be getting involved in stories from the further stretches of the globe. Non-Germans, I am still available and waiting to hear from you. view more - Trends and Insight