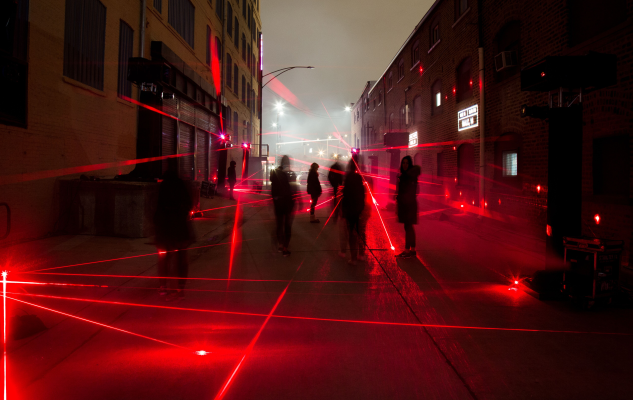 More than 30 people in Chicago were shot just two weekends ago, three of them fatally. The equivalent of a mass shooting occurs on a weekly basis, yet so many Chicagoans have become numb to the violence.

To inspire conversation and action, ICHV and FCB Chicago unveiled the 'Most Dangerous Street'. The installation showcases a week-by-week visualisation of Chicago’s gun violence. As you walk through the exhibit, you are guided by emotional audio of victim families telling their stories, while surrounded by red laser beams. Each beam represents a victim of gun violence. As you cross through the beams, details of that victim, including age, gender and time of incident, are projected on the alley wall. Imagine 38 lasers representing the actual 38 victims of gun violence in just one week in Chicago.

The 'Most Dangerous Street' specifically aims to gain support for the SAFE Act. The SAFE Act helps identify areas that experience high levels of crime based on data surrounding gunshot hospitalisation and mortality per capita to create Safe Zones for improved neighbourhood safety. You can click here to take action.

Liz Taylor, chief creative officer, FCB Chicago, comments: “Every day, we see headlines about gun violence across the United States – especially in Chicago. As a result, many people have become numb to this violence and don’t take action, which is a major problem. Creatively, we were determined to humanise these headlines by creating a visual experience that represented real-time victims. It’s extremely powerful, and we hope it drives individuals to step up and demand change.”

Rob Nash, board chair, The Illinois Council Against Handgun Violence, said: “The Most Dangerous Street exhibit portrays the grim reality of the gun violence crisis in Chicago. It’s an emotional display and we hope it motivates people to take action. The advocates’ and victims’ stories in the context of real-time shooting data is a powerful demonstration of why we need to support sensible gun violence prevention laws to protect communities across Chicago.”

Senator Patricia Van Pelt comments: “The SAFE Act is an important piece of legislation to help make our streets safe. The Illinois Council Against Handgun Violence Most Dangerous Street illustrates Chicago’s gun violence in a way that is impossible to ignore – all in an effort to get everyday Chicagoans to voice their support for sensible gun violence prevention laws."