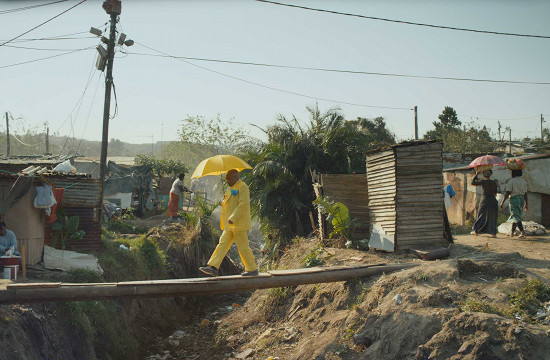 GUINNESS today announces the launch of its new TV advert for its continuing ‘Made of More’ campaign, which will air for the first time in the UK on 15 January 2014.

Following on from the recent ‘Basketball’ ad, the new ad builds on the iconic beer brand’s platform of celebrating people with extraordinary integrity and character.

Created by Abbott Mead Vickers BBDO and directed by Nicolai Fuglsig, the new advert uses real people in real situations and features the ‘society of elegant persons of the Congo’, otherwise known as the ‘Sapeurs’.

The ‘Sapeurs’ is a group of refined gentlemen from Brazzaville, the capital of the Republic of Congo, who have a deep-rooted pride in their aspirational culture.  Their life is not defined by occupation or wealth, but by respect, a moral code and a desire to inspire others through their style and attitude.  Their focus isn’t on the fabric or cost of the suit but the worth of the man inside it.

Marketing Director GUINNESS Western Europe, Stephen O’Kelly said: “What we love about the Sapeurs and drew us to them was not only the vibrancy and colour, but at its core, their story is one of dignity and self -expression.  In the spirit of Made of More we wanted to capture the story of a group of men whose integrity and character shone through despite the challenges they face.  Dressing well, can symbolise many things, but for the Sapeurs, fine clothes stand for peace, integrity and honour”.

Executive Creative Director of AMV BBDO, Adrian Rossi, said: “Building on the existing ‘Made of More’ campaign, GUINNESS continues to celebrate people with integrity and character as we introduce a group of extraordinary men from Congo-Brazzaville: The Sapeurs (La Société de Ambianceurs et des Personnes Élégantes - The Society of Elegant Persons). These men, who wear incredible suits in stark contrast to their surroundings, embody a universal truth. In life, we all have a choice. We can let circumstance define us, or we can defy it.”

The ad opens with a dramatic scene of fields on fire, as the men burn the sugar cane crop, a traditional process in the Congo pre harvest. As the ‘Sapeurs’ wash away the day’s grime and dress in their elegant style we witness their unique transformation. The ad culminates in a brightly coloured and social scene, which sees the community unite and celebrate the bold choice to live a lifestyle that is not only unexpected, but within their local communities is a source of inspiration and positivity.

The ad airs for the first time on British TV on 15th January 2014 and will be accompanied by digital seeding and cinema.  To view the ad and watch a feature documentary (below) directed by Héctor Mediavilla on the ‘Sapeurs’ visit www.guinness.com.