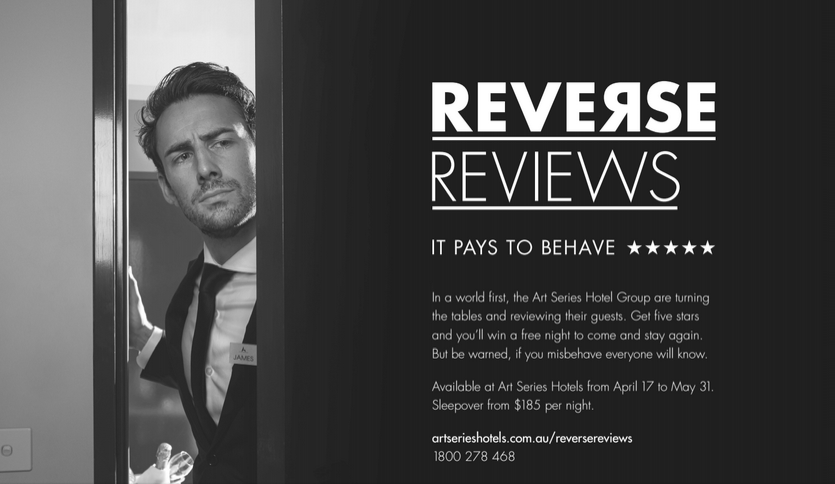 People staying at any of the six Art Series Hotels from 17th April to 31st May 2015 can opt-in to participate. Their behaviour and demeanour will be scrutinised, assessed and ranked using a point system and published online.

Guests scoring a rating of four or five stars will be rewarded with complimentary stays, upgrades, food and drink.

Art Series Hotel Group marketing director Ryan Tuckerman said the program is in response to the huge uptake of online review sites such as TripAdvisor.

“With more than 40 million reviews of hotels and restaurants on Trip Advisor alone, Reverse Reviews flips the process on its head and provides a way for us to recognise and reward good behaviour in a fun and light-hearted way," said Tuckerman.

“We are really proud of our review results and it’s no secret that hotels are incredibly competitive on these sites. We think our guests will respond in the same way," he said.

“More than 60 per cent of our penthouse stays are already deriving from upgrades and ‘comps’, so now we’re looking at rewarding our best customers in a more formal and structured way.”

The idea comes off the back of research conducted by independent research company Galaxy Research, and commissioned by Art Series Hotel Group, that reveals that guest behaviour is better than what most people expect, but petty theft and deliberately parading naked in front of windows is taking place under the veil of anonymity.

Findings from the research showed that of the 1,054 people surveyed:

- On the whole women are slightly better behaved than men;

- People believe the most common acts of bad behaviour are taking items and not paying (19 per cent), and not declaring mini bar items on departure (18 per cent);

- 30 per cent of those surveyed have participated in some form of anti-social hotel behaviour including walking in front of the windows naked (20 per cent) and small-scale hotel theft (10 per cent);

- Women from Queensland with incomes of less than $40K are less likely to trash a hotel room than men from Sydney;

- The wealthier you are the more likely you are to be rude to hotel staff (76pc of people with incomes of $90K and more); and

- The poorer you are the less likely you are to take an item without paying.

So what does the perfect hotel guest look like? Based on the survey results, women make better hotel guests than men in general. They are less likely to steal from the mini-bar, trash the room or flash themselves to passers-by.

Women from Perth, aged 50-plus, married with no children who don’t work (or who work in white-collar jobs) with an income of $40K or more a year are least likely to participate in any of the anti-social behaviours listed in the research.

Adam Ferrier, from Cummins&Partners said: “Working with Art Series Hotel Group is always exciting. As brand marketers they are world class, always looking for Avant garde ways to express their brand, whilst engaging their guests in interesting ideas. With this idea we believe ‘Review culture’ is a weird and complex emerging phenomenon, and we think turning reviews on their head is an intriguing way to get peoples attention.”

Reverse Reviews is being implemented at all Arts Series Hotels from 17th April until 31st May 2015.