The campaign centres around the moment you know you want to buy something, but just need to find an excuse to do so 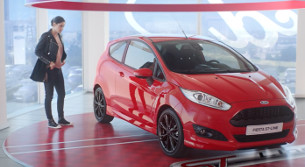 Ford is celebrating the launch of the New Ford ST-Line range with a Pan-Euro 360 campaign. The campaign, which has been launched by GTB, centres around the moment of truth when you decide you really want something, and search for any reason to justify the desire.

It breaks with three films, each taking a light-hearted look at prospective ST-Line buyers at their critical decision moment. They know they want it, but have they done anything, no matter how small in their past to deserve it?

Starting with three of Fords most loved cars, Fiesta, Focus and Mondeo, ST-Line offers a new level of performance led styling that sits just below the Ford ST marque.

The campaign will run across Europe from August onwards and is supported by traditional media and a cross-platform social campaign that asks the question “What have you done to deserve ST-Line?”

Says GTB Creative Director, Peter Hvid: “We love the insight that people use the smallest of justifications to talk themselves into something they want. So for this campaign we played up the tension between ‘just the right amount of selfishness’ a new Ford ST-LINE offers, and the tiny amount of ‘selflessness’ you need to deserve it.”