They will be working on Corona Light and Modelo, among other accounts. 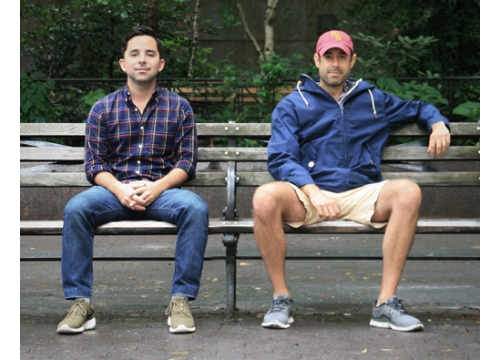 Creative directors Danny Gonzalez and David Suarez are joining the team at Goodby Silverstein & Partners. The duo starts on July 21.

They will be working on Corona Light and Modelo, among other accounts.

“I had a chance to work with Danny and Dave in New York, and I’m glad we convinced them to move west,” said creative director Eric Kallman. “Working with them again will be like putting on a really comfortable pair of jeans, but jeans that also surprise you, impress you and make you laugh. So, basically, way better than jeans. I think you get the gist of what I’m trying to communicate here.”

“I’m very excited to be joining an agency with such a long history of great creative work,” said Danny. “I’m also excited to take one of those ‘haunted Alcatraz’ tours. Overall there’s a lot of excitement.”

“The opportunity to move out west to work with Jeff, Rich, Margaret and Eric just seemed like a great fit for us,” added David, referring to co-chairmen Jeff Goodby and Rich Silverstein and executive creative director Margaret Johnson, in addition to Kallman.

To celebrate their arrival, the agency is giving away 100 “Danny Gonzalez and David Suarez are moving to San Francisco to work at Goodby Silverstein & Partners!!!” drink cozies. The limited-edition cozies are both informational and functional, keeping your drinks cool for the remainder of the summer. 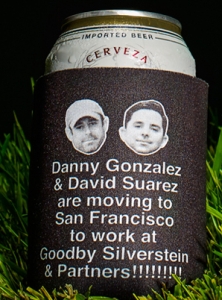 Before entering the freelance world earlier this year, Danny and David spent two and a half years at Barton F. Graf 9000 working across all brands, most notably serving as CDs on Ragù and Little Caesars. Previous to that they spent time at TBWA\CHIAT\DAY New York and J. Walter Thompson New York.