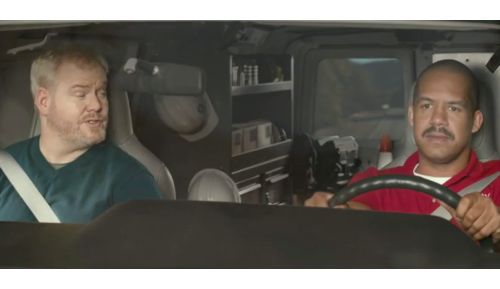 Questionable service with the Comcast provider has Gaffigan asking why he should believe the cable provider has really changed. But when he learns of the improved offerings—two-hour service windows, night and weekend appointments, and Comcast’s on-time-all-the-time guarantee—he’s presented with a head-scratcher. “Who am I going to bad-mouth at parties now? I guess my cousin. He’s so pale,” Gaffigan says.

The campaign also introduces Comcast’s new XFINITY My Account app, which empowers customers to troubleshoot technical issues, manage appointments and pay bills from their phones. Added features will be released in the coming months.

The “Whole New Day” campaign is a reflection of Comcast’s commitment to constantly improving service innovations and transforming the customer experience.

“We wanted to grab the attention of customers and ex-customers who are dubious about Comcast having changed,” GSP New York executive creative director Christian Haas said. “We thought it would be disarming to show how Comcast has improved by bringing a skeptical customer to ride along.”

Following the launch of “Reasons,” the campaign will offer additional spots—“Busy Man” and “Obsolete”—which will air in the next few weeks. The spots are running on TV, cinema and online pre-roll in 23 markets, including Denver, San Francisco, Seattle, Portland, Boston, Pittsburgh, Richmond, Miami, Detroit, Memphis, Atlanta and Washington, DC.